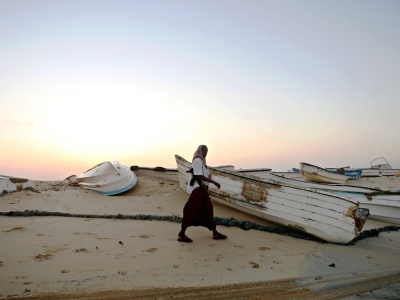 UK to host international conference on Somalia next month

The British government should consider bringing Somali pirates to Britain for trial, lawmakers said on Thursday, accusing the government of not doing enough to tackle a problem that cost $135 million in ransoms last year alone.

Parliament’s Foreign Affairs Committee also called on the government — which recently announced it will permit British merchant ships sailing off Somalia to carry armed guards — to state clearly when these guards may legally open fire.

“We conclude that for too long there has been a noticeable gap between the (British) government’s rhetoric and its action,” the influential committee said in a report on Somali piracy.

Britain will host an international conference on Feb. 23 to try to agree on measures to tackle instability and piracy in the east African country, described by Prime Minister David Cameron as a “failed state that directly threatens British interests.”

Pirates operating from the Somali coast have raked in hundreds of millions of dollars in ransoms from hijacking ships and currently hold up to 10 ships and 200 hostages .

“The number of attacks, the costs to the industry and the price of the ransoms have all increased significantly since 2007”, said the committee its report, calling for decisive action against piracy.

Proposals to pursue financial transactions related to piracy had potential as a tool in the fight against piracy, said the report. The solution lay theoretically in pursuing stability on land, although British and international leverage there was limited, it said.

Very few British merchant ships had been successfully attacked, but Somali piracy threatened Britain’s economy through the banking, insurance and shipping industries — all key to London’s position as a global financial centre — as well as ships that Britain depended on for trade, the report said.

“Despite this, piracy is not a priority task for Royal Navy forces and the UK has at times barely dedicated even one ship to counter-piracy activities. The naval operations have been further limited by the failure to prosecute detained suspects and rules of engagement that required strengthening earlier this year,” it said.

Noting that ransoms paid to pirates in 2011 totalled “an alarming $135 million”, the committee said the British government had been “disappointingly slow to take action on financial flows relating to ransom payments.”

Even when pirates are detained by naval forces, around 90 percent of them are released without charge, the report said.

The lawmakers said prosecuting pirates in local courts should remain the preferred option and conceded there were difficulties in bringing suspected pirates back to Britain for prosecution.

“However, we also conclude that there is no legal reason for the UK not to assert jurisdiction and try pirates in our national courts, and we urge the government to consider this as an option if no other country will take suspected pirates captured by UK ships”, their report said.

A Foreign Office spokeswoman rebuffed the criticism, saying Britain had “consistently been at the forefront of the international community’s efforts to counter piracy off the coast of Somalia.”

She said Britain would always seek to take action to help ensure the successful prosecution of pirates wherever there was a chance of success. “However, our first priority is to support the countries in the region to deal with the problem of piracy in the region itself”, she said.