Three major attacks in the Gulf of Guinea in December 2019 underlined the significant threat level for tanker operations in the region. The perpetrators escaped with 19, 20 and 8 hostages respectively. In November 2019, crew members from three different ships were also kidnapped.

Based on a broad range of sources, Risk Intelligence has collected between 80 and 140 reports per year in West Africa since 2007.

Threat levels vary across the region. Violent attacks, particularly those aimed at kidnapping crew members for financial reward, are largely concentrated on areas in geographic proximity to the Niger Delta, even though neighbouring countries are affected, a new publication by Risk Intelligence and Intertanko reveals.

Whilst naval forces in Nigeria – and other countries in the region – are being enhanced, kidnap-for-ransom attacks are very likely to remain a threat for operations in the Gulf of Guinea in the next 12 to 24 months.

This can largely be attributed to the fact that crew members are more likely to detect hostile speedboats relatively early during the day, allowing for more time to increase speed and conduct evasive manoeuvres.

Even after a successful boarding, attackers have escaped without any hostages on several occasions in recent years when they observed an approaching naval vessel. Overall, this highlights the importance of crew vigilance even when other mitigation measures have been put in place.

Finally, when such a high number of crew members are taken as hostages, additional dangers for the safety of the ship and the remaining crew should also be taken into consideration. Contingency plans are vital to ensure the wellbeing and safety of the seafarers remaining on board who are very likely to be deeply affected and in need of additional support.

The implementation of measures contained in the “Guidelines for Owners, Operators and Masters for protection against piracy and armed robbery in the Gulf of Guinea region“, read in conjunction with the Global Counter-Piracy Guidance for Companies, Masters and Seafarers (GCPG), decreases the chance that attackers are able to board any type of vessel at sea.

Additional measures, e.g. the use of dedicated escort vessels for transits to and from Nigerian ports and terminals, should be considered, based on a thorough risk assessment that includes the current threat level, the vulnerability of a particular vessel and the potential consequences of a successful attack.

Finally, companies should also evaluate and adjust their contingency plans, instructions for masters and emergency guidelines to reduce the overall risk to crews, ships and cargoes as much as possible. The situation remains volatile and should be constantly monitored. 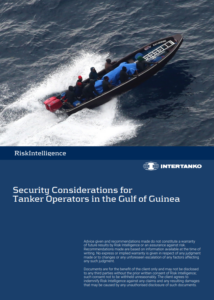