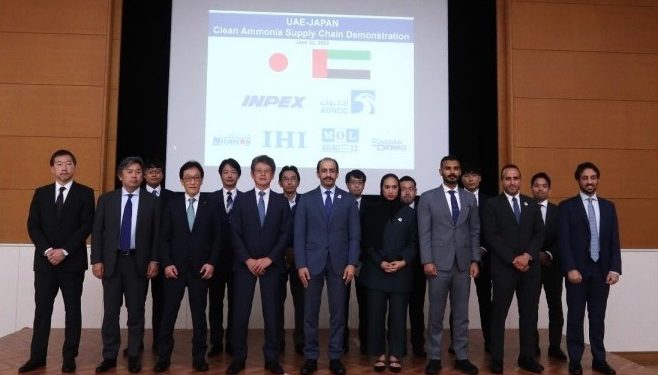 INPEX, IHI and MOL announced they have executed the demonstration of a clean ammonia supply chain linking the United Arab Emirates (UAE) and Japan.

The clean ammonia used for the demonstration was supplied by Abu Dhabi National Oil Company (ADNOC). It was produced by Fertiglobe, a joint venture between ADNOC and OCI.N.V. that is a supplier of ammonia, using natural gas produced in Abu Dhabi.

Most of the CO2 emitted from the production of the ammonia was sequestered and injected into Abu Dhabi onshore oil fields in which INPEX has a participating interest, making it clean ammonia.

INPEX oversaw the entire process of the demonstration in close partnership with ADNOC. MOL transported the clean ammonia to Japan in an ISO tank container with the support of Nippon Concept Corporation, in which the company holds shares.

As outlined in its “INPEX [email protected]”, INPEX positions the development of a hydrogen and ammonia business as one of the company’s 5 net zero businesses and seeks to commercialize three or more projects by around 2030 while aiming to produce and supply 100 thousand tons or more of hydrogen/ammonia per year.