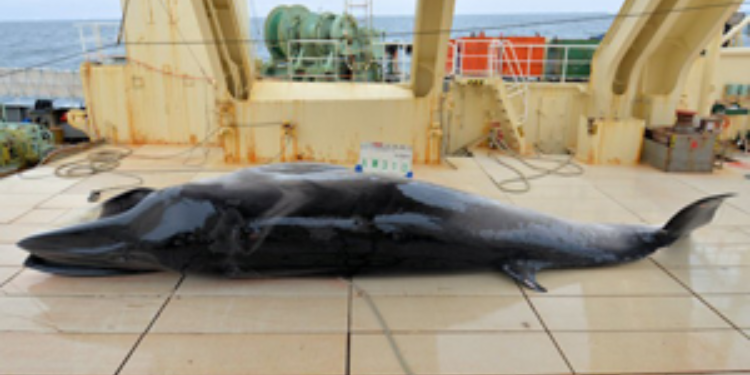 The Japanese fleet that fishes whales returned after killing 333 minke whales in the Southern Ocean. According to the Japanese Institute of Cetacean Research from the 333 killed whales, 186 were male and 181 female. Over 50% of the females were adult and preliminary analysis, such as pregnancy rates, suggest healthy fertility of the species.

The whales were hunted between December 18, 2018 and February 27, 2019, and the survey area was the sea area south of 60 degrees south between 0 degree longitude and 115 degree longitude.

Specifically, the Institute highlighted that on the previous season that 333 minke whales were killed, 181 were females, and 122 amongst them were pregnant.

In the meantime, Japan supports that the goal of the five-vessel survey is to enhance understanding of the species and regional ecology so that it can calculate capture limits.

The leader ship Nisshin Maru had Captain Eguchi Koji responsible, whereas the other vessels were sailed under the leadership of Captain Kasai Nishi, Captain Okoshi, Captain Abe and Captain Saki Yasu.

On the total, 175 people were involved in the expedition.

According to the Institute, the survey consisted of visual, lethal and non-lethal research.

In 2018, the Japanese Government left the International Whaling Commission and announced that it will cease whaling in the Southern Ocean after this season.

Yet, Japan will resume with commercial whaling in its coastal waters, joining Norway and Iceland as whaling nations in the North Pacific and the North Atlantic.

Generally, Sea Shepherd is opposed to Japanese whaling in the Southern Ocean every year from 2005 to 2017 except for the 2014/2015 season when the whalers did not return to Antarctic waters.

Sea Shepherd sent two ships down to the Southern Ocean in the 2016/2017 season but could not close in because of advanced military satellite technology that allowed the whalers to see Sea Shepherd’s movements in real time.

The organization did not return for the 2017/2018 whaling operation because it would be like taking a slingshot to a gunfight in pursuit of whalers who can see us but we can’t see them – in other words, a fruitless waste of time and resources.

In light of the 333 whales killed this season, Bob Brown, an Australian environmentalist, stated that it is a tribute to the millions who have supported Sea Shepherd’s peaceful obstruction of the Japanese slaughter of whales in recent years that this needless and illegal slaughter has been brought to an end. Japan’s ongoing whale killing in the North Pacific will now be the focus of global revulsion until that barbaric spectacle is also brought to an end once and for all.