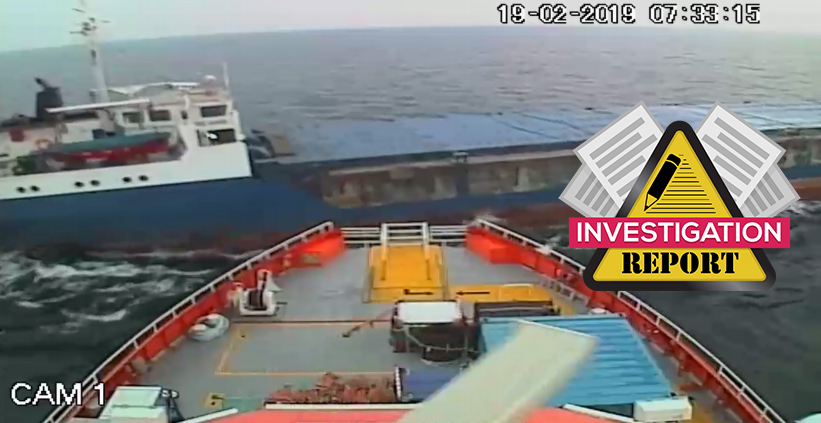 On February 19, 2019, the Cypriot-flagged cargo ship Raba, sailing from Copenhagen to Szczecin, collided with the Danish-flagged 'World Bora', which was sailing towards “Viking” wind farm in the Exclusive Economic Zone. Therefore, the Danish Marine Accident Investigation Board issued an investigation report to determine the factors that caused the collision.

The master of RABA was responsible for observing the traffic onboard the vessel and did not identify any ships as a risk of collision.

On the starboard side, the other vessel “WORLD BORA” was seen crossing RABA’s course but wasn’t considered as a danger that could cause a collision. Thus, the master didn’t pay closer attention. However, during his watch, he got preoccupied with other duties and lost track of time, resulting to him not following up with the crossing vessel he previously saw.

In the meantime, although the AB was conducting lookout, he didn’t inform the master of the close quarter situation until a few minutes before the collision.

Moreover, the AB was not aware of the serious danger, until he saw WORLD BORA rapidly approaching the ship. Once the master observed WORLD BORA, the collision could only be avoided by immediately turning the ship. Forgetting about the crossing ship changed the situation from being early traffic de-conflicting to an emergency response, once WORLD BORA was detected.

For the time being, it remains unclear why the master opted to contact the WORLD BORA instead of turning the vessel away, or even why he confused WORLD BORA with the fishing ship SIRIUS.

The report states that it is most likely that because of the situation, the short time the master had to react, along with his lack in knowing how to deal with the equipment may be the factors of him contacting with the wrong vessel in his attempts to avoid collision.

Following the investigation, the report presents the factors that are most likely to have caused the collision between the two vessels.

On the other hand, on WORLD BORA, the master never observed RABA approaching, that is why he thought it was safe to smoke and conduct administrative work while sporadically keeping visual lookout.

The master was focused on computer work and lost track of time, which resulted in RABA not being observed prior to the collision.

Given that WORLD BORA was operated as a conventional cargo ship and not as a HSC, the watch schedule and manning of the bridge. Therefore, there was no additional person on the bridge to keep lookout, and the approaching RABA therefore went unnoticed while the master sat by the desk using the computer.

The layout of the bridge comprised both navigational station, office, meeting room and smoking area on the upper deck, which facilitated engaging in non-watchkeeping activities while keeping the navigational watch.

DMAIB comments that, based on other investigations, watchkeeping is intertwined with other tasks than navigating the ship and keeping lookout.

Bridge watchkeeping practices are highly dependent on a variety of factors:

In waters where the watchkeeping officers consider it safe, they will direct their attention to other tasks such as writing in the logbook, updating charts, making phone calls or moving from the navigational station to read emails, file documents or go to the lavatory.

Even though these work practises are common and normally unproblematic, they became critical when the watchkeeping officers on RABA and WORLD BORA were simultaneously immersion in those activities when the ships were on a collision course.

World Marine Offshore have introduced preventive actions in different areas. The actions are as follows:

In accordance with collision m/v Raba with World Bora Company’s Management followed the actions below:

To learn more on the collision between the two vessels, click herebelow 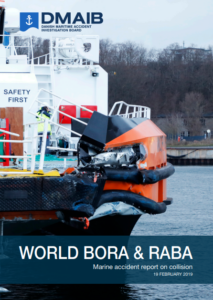