Investigation report reveals capsized tug did not operate under an SMS

The Transportation Safety Board of Canada published an investigation report of a tug that capsized, revealing that the vessel did not operate under an SMS, and the crew did not have procedures for identifying or mitigating hazards.

On October 1, 2019, Seaspan ULC deployed the tug Sheena M to tow the loaded wood-chip barge Seaspan 566 from Terminal Forest Products’ facility in Langdale, BC, to Howe Sound Pulp and Paper Mills in Port Mellon, BC. The master on the vessel sed a towline without a towing bridle to secure the towline from the towing winch to the barge’s port forward bollard.

At approximately 1237, the tug along with the barge departed the Terminal Forest Products facility at a speed of approximately 2 knots and proceeded about 180 m into the channel. Soon after exiting through the terminal’s safety gate, which consisted of 2 can buoys, the master made a port turn to head north towards Port Mellon.

However, the barge did not respond to the course alteration and the tug began to be girded by the barge and heeled to starboard. The master slowed the speed of the tug, and the tug righted itself.

They both managed to escape the capsized tug. Soon after, the towline parted and the Sheena M sank at position 49°28.025′ N, 123°28.350′ W. After the towline parted, the barge drifted in the vicinity of the Terminal Forest Products facility. The deckhand swam to a nearby tied‑up log boom, and the master swam to the barge Seaspan 566 and climbed on board using a ladder attached to the barge. 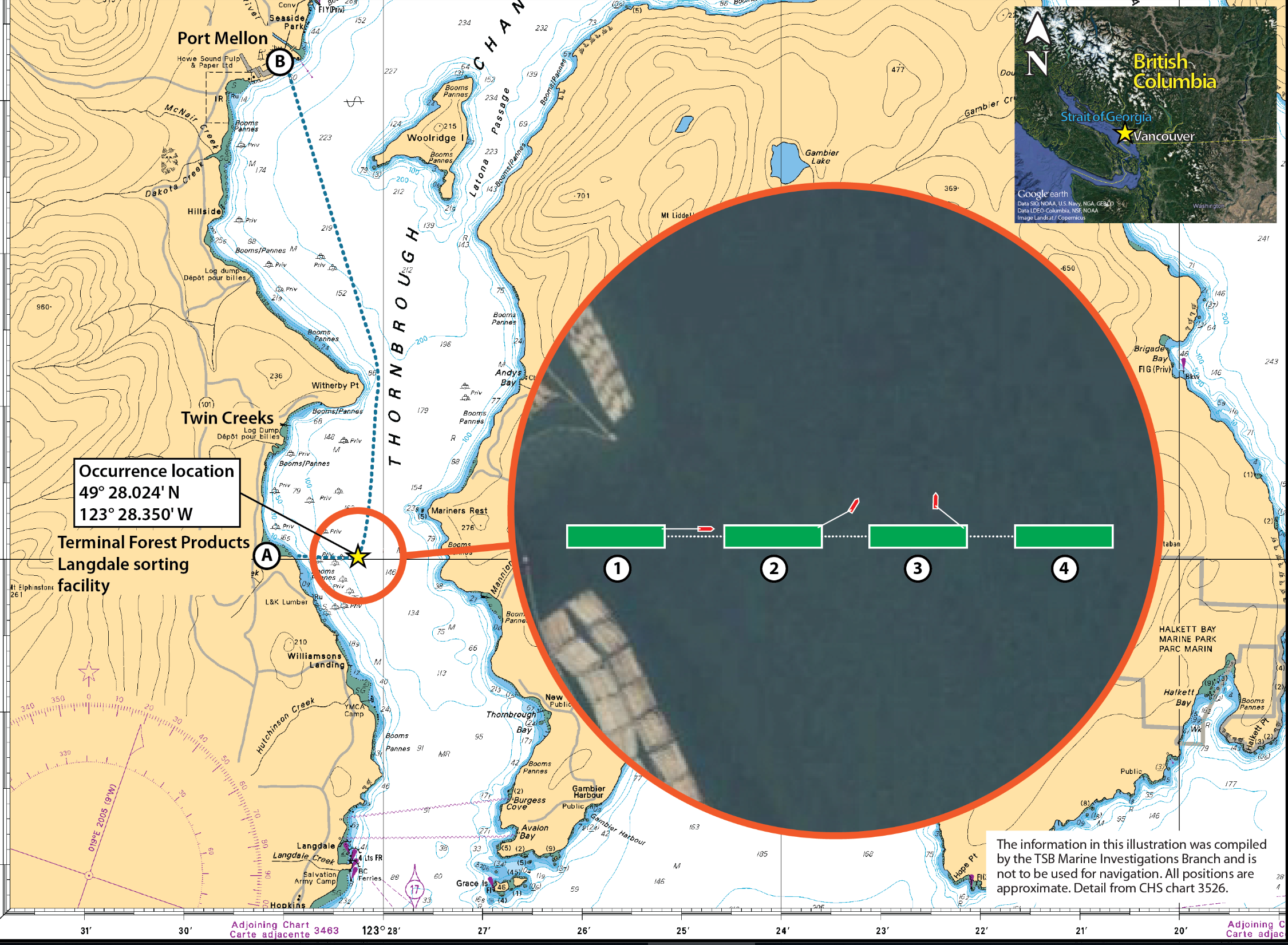 At the time of the occurrence, the weather was clear, the seas were calm, and the wind was 3 knots from the south-southeast. The tide was flooding. The sea temperature was about 13 °C and the air temperature was 12 °C. The Sheena M had approximately 2200 L of diesel fuel and 75 L of lube oil on board at the time of occurrence. Subsequent reports from the Canadian Coast Guard indicated that approximately 12.5 L of oil was visible on the water surface.

The Safety Board highlights that

The principal objective of a safety management system (SMS) on board a vessel is to ensure safety at sea, prevent human injury or loss of life, and avoid damage to property and the environment.

It is stated that the Sheena M did not operate under an SMS, nor was it required to by regulation. However, procedures for the safe operation of the vessel and for dealing with emergencies (such as girding) were still required by the Canada Shipping Act, 2001Footnote5 and relevant regulations and guidelines were applicable to the Sheena M as well.

In addition, the crew of the Sheena M did not have procedures for identifying or mitigating hazards such as girding. An SMS would assist owners and masters involved in towing operations to identify and manage risks such as girding through education, training, and the implementation of procedures.

The Board is concerned that, without adequate oversight by the Department of Transport, shortcomings in the safety management and operations of tugs less than 15 GT may not be addressed. The Board will continue to monitor this situation with a view to assessing the need for further safety action on this issue.

Explore more about the report herebelow 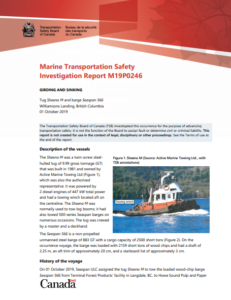