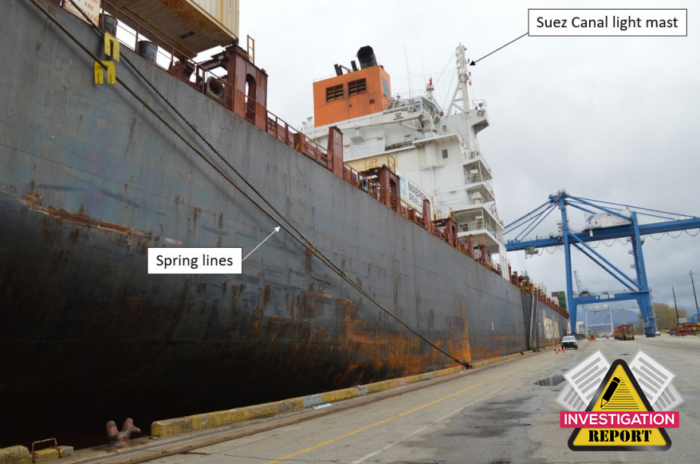 The Transportation Safety Board of Canada issued an investigation report about a vessel sailing through the Suez Canal when it collided with a light fixture, resulting to the light mast being damaged, while the festoon rail on Crane 4 was bent over.

On April 5, 2019, the Oakland Express began its journey from Seattle, Washington, U.S., to the Fraser Surrey Docks  in British Columbia, arrived at the Sand Heads pilot station at the entrance to the Fraser River.

Both the master and the pilot completed information exchange and then a Fraser River Pilot boarded. The master gave the vessel’s pilot card to the pilot, according to which the drafts were as 7.5 m forward and 8.3 m aft, with a maximum air draft of 46.0 m.

Then, the vessel proceeded towards the Fraser Surrey Docks under the conduct of the pilot. At approximately 1424, tugs were secured forward and aft to assist with berthing. The mooring boat informed the pilot via very high frequency (VHF) radiotelephone that the vessel was to be berthed with the bow at the 380 m mark. A linesman’s truck was parked at this location to assist the pilot in lining up the vessel’s bow.

The vessel was manoeuvred alongside the berth with the bow a few metres from the 380 m mark. The 1st line was ashore at 1448. Approximately 2 minutes later, the vessel was slowly moving ahead along the berth during final positioning, at which point one of the light fixtures on the Suez Canal light mast came into contact with the festoon rail on Crane 4.

Consequently, the vessel was pulled off the berth with the assistance of the tugs. Crane 4 was repositioned clear of the vessel, and the vessel’s berthing position was modified. The vessel was moored with the bow at the 340 m mark at 1548.

It is stated that the light fixture on the Canal light mast was damaged as a result of the striking, while the festoon rail on Crane 4 was bent over a distance of approximately 4 m and became misaligned with the horizontal section located under the beam. 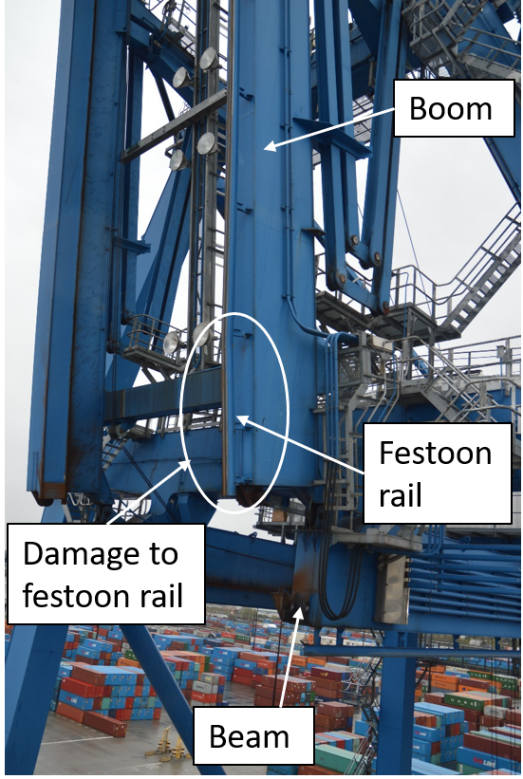 In reference of this incident, the Board comments that

It is important that terminals identify hazards and mitigate all risks while developing and executing berthing plans. Pilots and terminal operators must take into account the specific particularities of a vessel and guidance issued by pilotage authorities.

The Oakland Express and its sister vessels have a special consideration with respect to air draft because of the proximity of the Suez Canal light mast to their shipside. Masters on these vessels must be mindful of this consideration and proactively share this information with pilots and terminals.

Explore more about the report herebelow 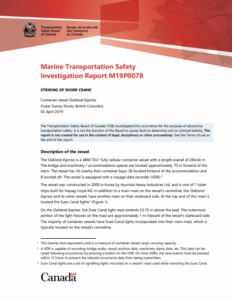