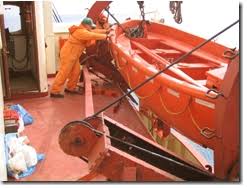 The Master wanted to complete a lifeboat drillsince the vessel had been in dry dock and lotsof the crew had been replaced. It was decidedto start the drill at 15.30. It was a sunny dayand the vessel was at anchor, there was a slightswell but the Master didn't really think it wasof any concern. The vessel had left dry dock latethe previous evening and was at anchor in abay close by.

Some of the new crew had joined the vessel theprevious day. The new crew included a couple ofratings, a newly promoted 2nd Officer and a Cookwho had never been at sea before. One of theduties of the 2nd Officer was to act as safetyofficer. The Chief Officer had planned to train the2nd Officer about his safety officer duties duringthe following sea passage.

While at dry dock an external company hadcarried out the 5-year replacement of all wiresfor all lifeboats and the fast rescue boat. Theyalso completed the annual inspection of thehydrostatic unit, dynamic test of the winch breakand the on-load test, which is also mandatory forreplacement every 5 years.

The crew had also carried out some maintenance on the lifeboats and replaced some old ropes and other equipment. After all maintenance and tests were complete the Chief Officer inspected the lifeboats. He found that the boese tackle ropes were too large to be held on the bitts. He wrote this down and told the bosum to fix this when he had time.

The drill commenced at 15.30 and one of thelifeboats was lowered, starboard side, and heldalongside the embarkation deck. The lifeboat'sbowsing tackles were rigged. The crew boardedthe lifeboat. The duty of the Cook, who was oneof the crew in the lifeboat, was to be forward andrelease the hook when the lifeboat touched thewater. This was only his second day onboard and he had not received any training about his safetyduties, but the Chief Officer planned to guide himthrough the drill.

The Chief Officer ordered the tricing pennantsto be released. This was not a problem for theengineer on the stern of the lifeboat. The Cookdid not really understand what he was requiredto do and could not release the pin securingthe tricing pennant hook release lever. The 2ndOfficer, who was in charge of the lifeboat, leftthe steering wheel and crawled on the roof toassist the cook who was also on the roof, neitherwere wearing safety harnesses, but were wearinglife jackets. The 2nd officer had not zipped up hislife-jacket as it was a little tight.

The 2nd Officer finally managed to removethe pin but at the same time the cook moved,causing the forward bowsing rope to come free.The lifeboat swung violently causing the 2ndOfficer and Cook to lose balance and fall over-board into the water, which was 15m below them. The Cook signalled from the water that he was ok but the 2nd Officer could not be seen, with only his life jacket visible floating on the surface.