India prohibits single-use plastics on board ships in its waters

Above image is used for illustration purposes only / Credit: UN Environment

India announced that it will ban the use of single use plastics on board Indian ships and foreign ships, when these ships are at a port or place in India. The ban will take effect from 1 January 2020.

Specifically, the items that will be banned include the following:

However, some products will be prohibited with immediate effect. These are:

In addition, administration surveyors while conducting Flag State Inspector/Audit/Survey of Indian ships, must ensure verify that single use plastics are neither used and nor available on Indian ships. In case of non-compliance, a deficiency raised will be rectified before departure. If same deficiency is repeated during next inspection, it may be taken as a clear ground for detention under ISM Code.

Moreover, administration surveyors while performing Port State Inspection of foreign flag vessels, must make sure that single use plastics are not used and are kept locked in a store during their stay in Indian ports and on their passage through the territorial waters of India. A foreign ship intending to enter an Indian port, is required to make a log entry identifying the “Single Use Plastic Items” on board the ship and stating the time, latitude and longitude along with the location of the store where these items are stored before entering Indian territorial waters. Furthermore, no single use plastic items are to be discharged to port reception facility at an Indian port. The latter has to be verified during Port State Inspections.

Finally, no detention of foreign ships should to be enforced. In case it is found necessary, after uploading all other deficiencies on IOCIS website, a handwritten deficiency could be rectified prior to departure. However, no such deficiency will be uploaded on IOCIS. 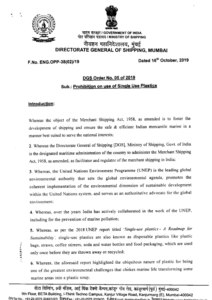