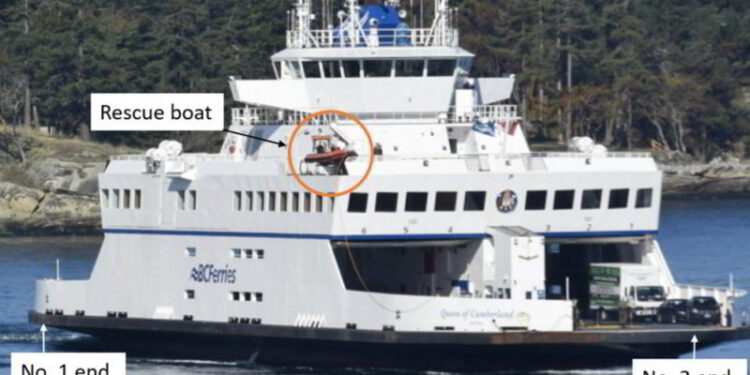 Canada’s Transportation Safety Board (TSB) issued an investigation report on the uncontrolled fall of a rescue boat during a drill onboard the RoRo passenger ferry ‘Queen of Cumberland’ in April 2018 off British Columbia, that caused two injuries. The investigation found that incorrect securement led to the fall.

On 18 April 2018, the crew on the RoRo passenger ferry ‘Queen of Cumberland’ were using an onboard davit to hoist the vessel’s rescue boat out of the water during a drill, when the hoist cable parted.

Both crew members were injured, one of them seriously, and the rescue boat was damaged.

The investigation found that the rescue boat painter (rope) was not secured with sufficient working length, thus exerting a force on the rescue boat and cable as it was being raised. The resulting side load caused the hoist cable to get pinched and break, resulting in the boat falling into the water along with the two crew members.

Following the incident, the company issued a fleet-wide Operations Bulletin advising of the occurrence and prohibiting the use of all luffing davits throughout the fleet, except in emergencies.

It also issued a Fleet Operations Directive, advising that a fleet-wide technical inspection of all rescue boat davits was in progress to verify the equipment’s fitness for purpose and another Fleet Directive to remove the “emergency use only” restriction on davit and rescue boat operations.

On 31 August 2018, following another incident with a rescue boat onboard the Spirit of Vancouver Island, BC Ferries reinstated an “Emergency Use Only” restriction for all davits and rescue/work boat combinations. Other than for real emergencies, no personnel are permitted to be in the boat when it is being lowered and/or raised.

By 2019, the company had also replaced the davit, trained the crew on davit operations, completed risk assessment for the launch and recovery of rescue boats, created a Nautical Standards group to manage fleet operations safety-critical assets and conducted internal and external audits, among others.

BC Ferries completed a Divisional Inquiry into the Queen of Cumberland occurrence, recommending: 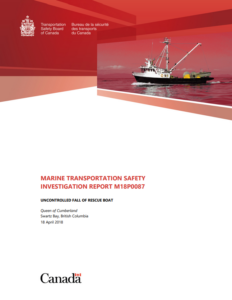