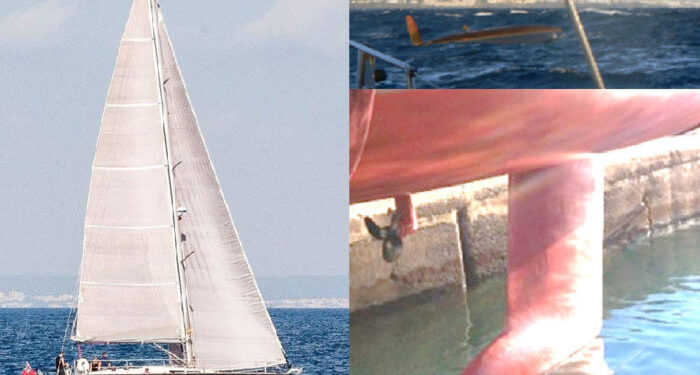 UK MAIB has published its report on the UK registered charter yacht, Tyger of London, whose keel failed suddenly on 7 December 2017 and the yacht capsized. The crew, all wearing lifejackets, were thrown into the water and rescued by the British Army yacht, St Barbara V.

On 7 December, the penultimate day of the charter period, the yacht left the harbour and headed east towards Tenerife into a fresh south-easterly force 5 breeze. Considering that it would be a rough passage, the crew wore lifejackets and secured their safety lines to the yacht. In addition, noting that the navigational track to Marina San Miguel was into wind, the skipper chose a passage plan that took the yacht almost due east to the coast of Tenerife before tacking south, in the lee of the island, towards Punta Rasca.

When the Tyger of London cleared the harbour, the crew hoisted and set the sails with a single reef in the main sail. Afterwards, as the wind strength increased and the yacht started to pitch in the 1-2m sea state, the skipper ordered a second reef to be put into the main sail.

During the passage the crew saw that water had seeped into the cabin through the forecastle hatch and cabin windows. With the yacht heeling to approximately 20º the electric bilge pump, positioned on the centreline, could not pump the water out, so the skipper bailed it out by hand.

A little later, Tyger of London’s skipper and crew saw another yacht, St Barbara V, approximately 1 mile ahead. As the wind had fallen to force 6, they decided to remove the second reef from the main sail to pass St Barbara V.

As Tyger of London cleared Punta Rasca, the wind backed to the east and increased to force 7. The skipper decided to reduce sail and ordered to put a second reef into the main sail. Once complete, the crew returned to the cockpit and remained clipped on with their safety harnesses. The helmsman then changed course to starboard to fill the sails. Tyger of London was approximately 200m to the east of St Barbara V.

A few minutes later, the crew heard a loud bang. The skipper thought that one of the shrouds had parted, while another member of the crew thought that a heavy object had fallen over in the cabin. However, Tyger of London heeled quickly to starboard, its mast and sails hit the water and then, after a brief pause, the yacht inverted.

As the vessel heeled over, the crew fell from the cockpit. Some of the crew struggled to unclip their lifelines. However, they all released themselves and, as they entered the water, their lifejackets inflated automatically. Four of the five crew quickly swam clear of the upturned yacht. One got trapped by the netted guardrails, but after 30-40 seconds managed to swim clear.

After an investigation, UK MAIB, concluded to the following as the most probable cause of the incident:

As for British Marine, it:

Made the proposal at the ISO 10240 working group in June 2018. However, the consensus at the meeting was that, in light of British Marine’s and several other proposals, the international standard should instead be amended to require small craft owner’s manuals to:

Provide information, applicable to the craft type, for actions to be taken following a grounding of the craft

In addition, the Maritime and Coastguard Agency drafted a series of MGNs to provide improved guidance on keel inspection and the stowage of lifesaving appliances.

Finally, the Royal Yachting Association amended its annual letter to SCV owners and managers reminding them of the importance of reporting accidents to both themselves and the MAIB. 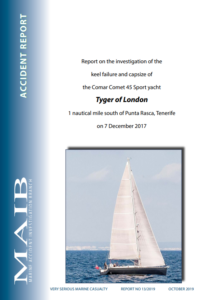