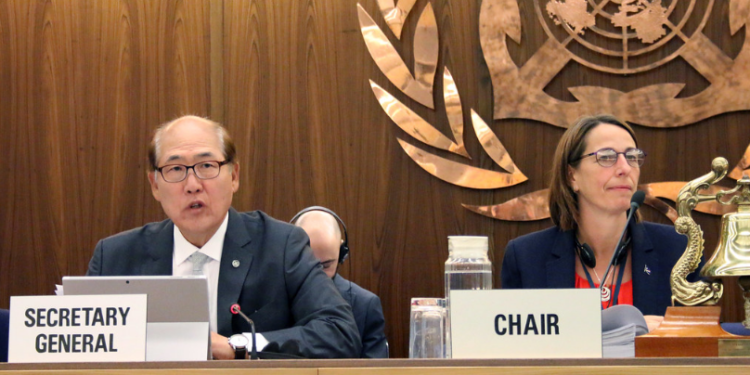 IMO's Sub-Committee on Carriage of Cargoes and Containers is meeting for its sixth session this week (CCC 6), on 9-13 September / Credit: IMO

IMO’s Sub-Committee on Carriage of Cargoes and Containers, held its 6th session on 9-13 September, focused on launching new initiatives to enable the use of methanol and ethanol as fuel, as well as the use of fuel cells, to meet IMO’s climate strategy.

The Danish Maritime Authority (DMA), that participated in the meeting, reports that the attendants drew their attention on three specific matters; Amendments to the IGF Code and developmet of guidelines for low-flashpoint fuels; Amendments to the IMSBC Code and supplements and Ongoing development of the IMDG Code.

#1 Amendments to the IMSBC Code

UK: DNV to demonstrate safe use of pipelines to transport 100% hydrogen

The participants discussed the modification of the existing Group A in the IMSBC; Gard’s Penelope Cooke reported that the amendments to the Code are about the criteria  under which coal cargoes are considered Group A, on the contrary to Group B chemical hazards which apply to all coal cargoes. Yet, DMA added that there were not conclusions drawn during the meeting, and the matter will be discussed on the upcoming CCC 7.

The next edition of the IMSBC Code (MSC 462(101)) will be obligatory starting January 1, 2021, whereas interested parties can proceed to its appliance from January 1, 2020.

#2 Ongoing development of the IMDG Code

The second topic was about the classification and transportation of Charcoal, non-declarations and mis-declaration of dangerous goods in accordance with the IMDG Code. As reported by TT Club, 2019 has seen a rapid increase on cargo-related container ship fires, most of them concerning vessels that transport charcoal.

For the time being, the special provisions on the IMDG Code enable Charcoal transportation in the “non-dangerous goods” category; Therefore, the meeting decided to issue a correspondence group to thoroughly review the SP´s within the IMDG Code, and identify the rational for the inclusion of the identified SP’s. The Correspondence Group will collect its thoughts on the matter and discuss them on the next CCC meeting.

The Sub-Committee completed the Interim guidelines on the use of methyl/ethyl alcohol as a fuel. The guidelines are to be approved by MSC 102.

Also, in this part, the Committee put on the agenda the draft interim guidelines for the safety of ships that run on fuel cell power system; The guidelines will be further discussed during CCC 7.

The Sub-Committee announced the addition of low-flashpoint oil fuels (Oil Fuels with a flash point between 52°C and 60°C) and LPG in the IGF Code. This plan includes the meetings up to CCC 10 in 2023.