Greenpeace launched 'In Deep Water' report to highlight the fatal impacts deep sea mining has in the marine environment. Deep sea mining is severe and potentially irreversible to environmental health, both at the mine sites and beyond. The deep ocean’s biodiversity and ecosystem functioning is barely understood and robust risk mitigation is not possible.

The report addresses that deep sea mining undermines progress towards UN Sustainable Development Goal 12, which aims to ensure sustainable consumption and production patterns. In the meantime deep sea mining also goes against UN SDG 14, which refers to conserve and sustainably use the oceans, seas and marine resources for sustainable development.

In addition, deep sea mining could even affect climate change by releasing carbon stored in deep sea sediments or even disrupt the processes which help ‘scavenge’ carbon and deliver it to those sediments.

Voices from the fishing sector are also joining environmental groups in warning of the severe risks to fisheries, amplifying calls for a moratorium on deep sea mining.

According to the report, the deep sea mining industry has already identified that environmental concerns, especially the destruction of endemic ecosystems, are significant blocks to the development of the industry.

all agreed that environmental concerns are the biggest blocker to progress.

For the time being, deep sea mining is regulated by the International Seabed Authority, but important limits in the ISA's mandate, as well as concerns with its environmental management in practice, underscore the problems with the current fragmented system of ocean governance. Also, ISA is not able to conserve deep sea environments or protect the marine life in the border of the ocean that could be impacted by deep sea mining.

This highlights the need for governments to agree a strong Global Ocean Treaty at the UN next year, to put protection at the heart of managing international waters.

ISA has consistently supported the development of deep sea mining over marine protection, and is used by mining companies seeking to exploit the seabed as an avenue to gain diplomatic support from governments. The report notes that the Authority has never yet turned down a licence application, even to explore places of high ecological significance like the Lost City near the Mid-Atlantic Ridge, which has been identified as an ecologically important area under the UN Convention on Biological Diversity and which meets criteria for UNESCO World Heritage status.

Corporations have begun speaking on behalf of government delegations at ISA meetings, and some government applications for exploration contracts have even been prepared and funded by deep sea mining companies. 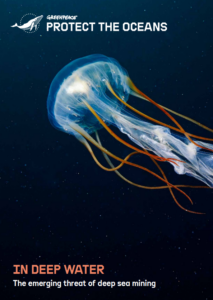