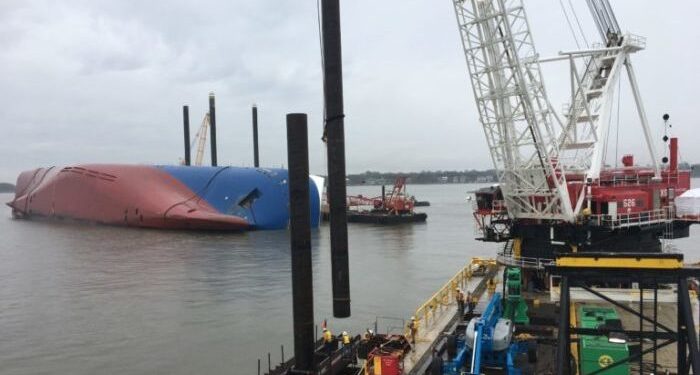 Following the salvage of the Golden Ray wreck in St. Simons Sound, Brunswick, Georgia, engineers announced that they will be modifying the mooring system to be used for the heavy lift vessel.

In fact, salvage engineers will be modifying the mooring system to be used for the VB10,000 at the Golden Ray wreck-site delaying the cutting and lifting operations by several weeks.

Engineers with the response designed an array of five anchors that accounted for multiple challenging variables such as extreme currents in the sound, restrictions to movement due to the Environmental Protection Barrier (EPB) and proximity to the shipping channel. After successfully installing and pull-testing four anchors, the remaining anchor at the most challenging mooring site in the system did not meet its pull-test requirements.

What is more, the Unified Command (UC) is reviewing multiple options for a revised anchor system and will make a decision that ensures the safety of responders and the public, safeguards the surrounding environment as well as provides for the continuation of commerce in the port.

For the records, the Golden Ray wreck remains stable and is monitored continuously by sensors at the wreck-site and during hydrographic surveys around the EPB.

Approximately 400 personnel and 50 on-water assets including tugs, barges and response vessels continue preparations to cut and lift the wreck.

At the same time, an environmental unit conducts shoreline assessments throughout the week and pollution response teams continue to monitor the wreck site. No emergent environmental impacts have been observed.