Above image is used for illustration purposes only / Credit: HHLA / Photo by: Thies Rätzke

The European Sea Ports Organisation (ESPO) together with the European Federation of Inland Ports (EFIP) published a joint paper calling for the strengthening of port-rail connectivity with regards to the European Union’s transport policy.

In fact, the paper entitled “Ports in the European Rail System” suggests that the implementation of the current EU legislative rail framework should take into account that rail management is not a core task for port authorities, as they have to deal with a complex web of transport, logistics, industry, energy, blue growth and community interests.

In addition to this, a one-size-fits-all approach is not appropriate, as the set-up of rail systems in European ports varies considerably in terms of infrastructure development and management, rail operation, charging systems and contractual relations between port authority and rail operators or undertakings.

It is further proposed that the use of rail as a sustainable transport mode should be maximized and further comply with the priorities set in the TEN-T legislation. For this to happen, efficient rail operations and links to, from and within ports are of vital importance.

Also, freight transport by rail should be maximized and the allocation of high quality freight train paths to and from European ports has be enhanced, as it has good environmental performance and can act as an effective means of reducing road congestion in densely populated areas.

To function at their best, European ports must rely on efficient and sustainable hinterland connections; rail can play an important role in that. The work of the port rail expert group has put the finger on some issues that hamper the seamless railway connectivity to and from ports.

Furthermore, as the recently adopted Port Services Regulation (EU) 2017/352 laid down the principle of autonomous charging; port infrastructure charges are an important tool for both sea and inland ports, in order to pursue their economic, social and environmental strategies.

Port managing bodies should also remain free to choose an integrated or separate rail charging model in order to incentivize the use of rail transport as long as it is transparent and non-discriminatory for the rail users.

As a climate friendly mode of transport, rail is an essential part of that. Rail and inland waterway transport together represent the most optimal, green transport combination. New rail connections and initiatives allow inland ports to connect to markets across the Eurasian continent.

Earlier in the year, the railborne seaport-hinterland transport at the Port of Hamburg, Germany's largest universal port, accounted for an overall of 46.8 million tonnes during 2018 , increasing by 2.7% and 2.44 million TEU, equal to 4.7%. Specifically, up to 60.000 cargo trains with approximately 1.6 million freight cars were handled during 2018 on the Port Railway network alone, enabling the port accomplish its milestone as Europe's leading rail port.

In September, the European Sea Ports Organisation (ESPO) submitted its proposals regarding the European Commission's review of the TEN-T Regulation 1315/2013 which kick started before summer with a public consultation. ESPO believes the new TEN-T guidelines should be adapted to recognize the role many seaports are playing in the field of energy and digitalization over their classical role as components of maritime transport infrastructure. 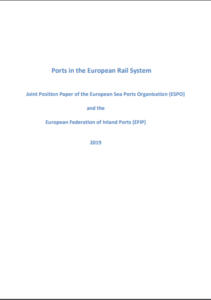