ESPO: The Ten-T review must recognize the new roles of ports

by The Editorial Team
in Ports, Regulation

The European Sea Ports Organisation (ESPO) submitted its proposals regarding the European Commission’s review of the TEN-T Regulation 1315/2013 which kick started before summer with a public consultation. ESPO believes the new TEN-T guidelines should be adapted to recognize the role many seaports are playing in the field of energy and digitalization over their classical role as components of maritime transport infrastructure.

The Trans-European Transport Network (TEN-T) is a planned network of roads, railways, airports and water infrastructure in the European Union, firstly adopted in 1990.

European ports remain strong supporters of the 2013 Europe’s Transport Infrastructure Policy, which literally put the seaports on the TEN-T map. It is now time to adapt the framework to the new market realities, new challenges and new needs. Looking in a more comprehensive way at what ports can do, not only for transport, but also in terms of decarbonisation of society and digitalisation of supply chains and having that mirrored in the guidelines, is one of the to-do’s in this review. Nowadays ports are much more than a component of maritime transport, they have a pivotal role between the different modes and the different networks,

For European ports, the review must be used, above all, as an opportunity to update the TEN-T network in relation to:

As such, ESPO notes, the new TEN-T guidelines should be adapted to recognise the role many seaports are playing as strategic multimodal nodes, nodes of energy and digital hubs on top of their classical role as components of maritime transport infrastructure.

Their unique role makes each European port a strategic partner in responding to today’s main challenges of decarbonisation and digitalisation.

Moreover, ESPO stresses, the new TEN-T policy should also take into account and encourage cooperation, clustering and merging developments in the port sector.

European ports believe that port clusters have to be clearly defined in the framework of the future TEN-T policy. While the clustering should not change the initial identification of “core” and “comprehensive” ports, individual projects should be assessed in terms of their relevance for the cluster and thus the network as such.

In order to use the full potential of the network’s maritime links, short sea shipping should be strongly facilitated as an equally important transport mode for intra-European transport next to the other transport modes, ESPO added.

In that regard, MoS requirements should be reviewed and the maritime links between two countries should be fully acknowledged and prioritised as cross-border.

The Public Consultation on the review will be followed by an evaluation study and other targeted consultations. The Commission proposal for a revision is planned for the first semester of 2021. 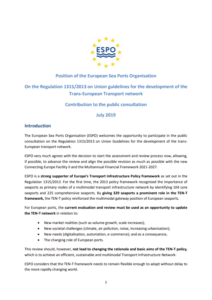