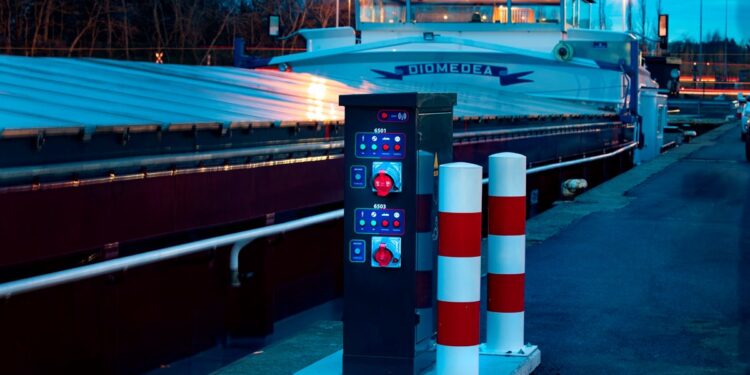 For inland shipping captains who invest in energy-saving measures, shore-based power is becoming an alternative to the traditional onboard diesel generator. This is the conclusion of 26 energy scans conducted on inland vessels.

Namely, the scans were offered free of charge by North Sea Port, the Flemish government and the Port of Antwerp in order to promote the use of shore-based power by inland vessels.

Shorepower stations are available in the Port of Antwerp, in the North Sea Port and along Flemish waterways. Research shows that they could be used more often. The outcomes of the study are supported by the European partners in the Clean Inland Shipping Project.

In order to raise awareness and increase interest in shore-based power in the inland shipping sector, at the end of September last year the Port of Antwerp, the North Sea Port and the Flemish government issued an appeal for candidates for a free energy scan. Twenty-six inland shipping vessels responded to this call.

From the energy scans carried out, it appears that on average, investments pay for themselves within four years due to the energy savings that are achieved. The 26 ships together saved 1.9 GWh on an annual basis, or as much as what 63 families use in electricity in a single year. That amounts to 499 tonnes less CO2 emissions per year.

The savings differ per type of ship, as a tanker or inland container ship can save as much as the equivalent of 4.5 families per year. At the same time, a dry bulk barge that makes all the modifications saves about as much as one family.

These energy scans form part of the European Clean Inland Shipping (CLINSH) research project, which in turn falls under the European Life Programme which focuses on the environment, nature conservation and climate action.

It also aims at improving air quality through the conversion and monitoring of inland shipping vessels on the one hand, and enabling shore-based power infrastructure on the other.

Inland shipping is an essential and sustainable link in the transport of goods to and from the seaports. Shore-based power helps make transport even more sustainable, as it reduces the energy consumption of inland shipping vessels, cuts down on emissions and noise levels

What is more, Daan Schalck, CEO North Sea Port, 58% of the transport between the harbour area of North Sea Port and the surrounding countryside is carried out by inland shipping.

Inland shipping captains can buy 100% green electricity from the shore-based power stations of the Port of Antwerp. These energy scans show that it pays off for them to convert their electrical installations on board for this purpose