Transport Malta’s Marine Safety Investigation Unit (MSIU) issued an investigation report on the collision between the Maltese-registered general cargo ship ‘Britannica Hav’ and the Belgian-registered fishing vessel ‘Z121 Deborah’, while underway in the English Channel in March 2018. The report found that a close quarter situation developed and progressed to an extent that the collision between the two vessels became inevitable. The investigation also highlighted issues relating to poor manning and insufficient lookout.

Britannica HAV was on a passage from Pasajes, Spain to Keadby, UK via the English Channel with a cargo of steel profiles (beams). Britannica HAV’s passage plan took her between Casquets Traffic Separation Scheme (TSS) and Dover Straits TSS, a widely used shipping lane. Z121 Deborah left Milford Haven, UK on 14 March at about 1630 and proceeded to fish in area 7D.

On 20 March 2018, Britannica HAV was proceeding generally East Northeast towards Dover Strait TSS, whilst Z121 Deborah, having stowed her fishing gear, was moving Southwest across the English Channel, to a fishing area near Le Havre in France. Both vessels were in a crossing situation.

After observing Z121 Deborah for some time, the navigational OOW onboard Britannica HAV altered course to port to increase the closest point of approach (CPA) of Z121 Deborah from 0.5 to about 0.7 nm.

At some stage, following the alteration of course, the navigational OOW noted that the CPA to Z121 Deborah had decreased to almost zero. It appeared to the OOW that Z121 Deborah had altered her course to starboard, although he could neither see her wake, nor her relative trail on the radar.

Concerned with the situation, he tried to call Z121 Deborah on VHF radio channel 16 and channel 13, however, there was no response. The navigational OOW on board Britannica HAV engaged manual steering and put the rudder hard to starboard and sounded a warning signal on the whistle.

The turn was very slow and eventually Z121 Deborah’s bow collided with Britannica HAV’s port side in way of wing ballast tank no. 3.

Soon after the collision, Britannica HAV developed a list to port, which kept increasing. It was confirmed that the cargo hold was breached and tidal. Taking stock of the situation, the master ordered that the vessel was abandoned. All crew members were rescued before the vessel capsized.

During the course of the safety investigation, the managers of Britannica HAV have carried out an internal investigation in accordance with the requirements of the company’s SMS.

The outcome of the internal investigation was shared with masters serving onboard the company’s fleet. Crew members were required to discuss the accident and the safety lessons learned.

A Company decision was also taken to install dual ECDIS onboard the company’s fleet vessels. The installation date will be completed by the end of 2020.

Transport Malta recommended Belgian Maritime Inspectorate to issue an information notice to fishing vessel registered in Belgium to highlight the significant hazards of inadequately manned wheelhouses, in particular when the vessel is in close proximity of busy shipping lanes and TSS zones.

The video provides an aerial view of the cargo vessel ‘Britannica Hav’ soon after the accident: 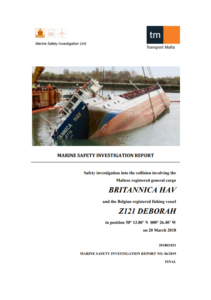