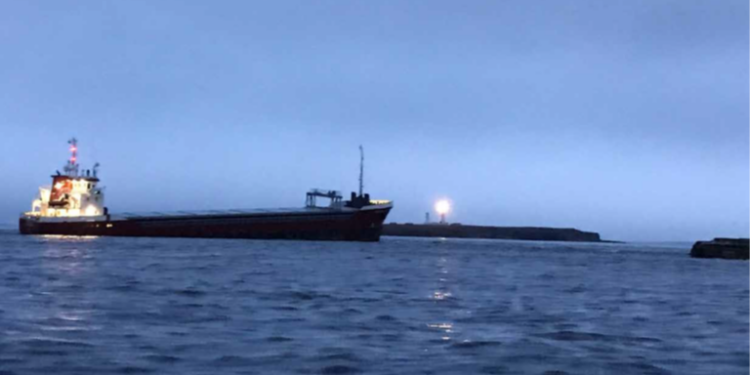 Ship aground with the pentland skerries lighthouse visible in the background / Credit: UK MAIB

As part of its BSafe campaign, Britannia P&I Club describes a case of a lone watchkeeping grounding. While on passage at night, a 2,281gt general cargo ship ran aground on the pentland skerries in the eastern entrance of the pentland firth, Scotland, sustaining significant hull damage.

On the afternoon before the grounding, while on passage, a bridge team meeting was held to discuss the forthcoming transit of the Pentland Firth, a stretch of water to the north of the Scottish mainland notorious for extreme tidal and sea conditions.

The master decided to adjust the bridge watchkeeping schedule in order to make the transit in favourable tidal conditions. The cadet was directed to keep watch from 2300 to 0200, and the maritime officer would then commence his watch with the transit of the Pentland Firth due to begin at about 0500.

The maritime officer relieved the cadet as officer of the watch (OOW) at 0200 with the ship making 7.8kts on a heading of 280° in calm seas. The ship had been on track mode steering, which enables it to automatically follow its planned track. However, the maritime officer deselected this and switched to the standalone autopilot and set the heading to 279°.

Alone on the bridge, he then sat down in the bridge chair and started watching music videos on his mobile phone. The bridge navigation watch alarm system (BNWAS) was not in use.

At about 0400, the OOW looked at the radar and realised that the ship was south of the planned track. At the same time, he observed two small islands ahead on the radar. He decided to proceed between the islands and after which he intended to alter course to starboard to regain the planned track.

At 0427 an Orkney Vessel Traffic Service Officer (VTSO) observed the vessel on his radar heading towards the shallow waters of the Pentland Skerries and contacted the Shetland Coastguard Operations Centre (CGOC). The CGOC watch officer then contacted the ship by VHF and queried whether the OOW was aware of the islands two miles ahead. The OOW acknowledged the situation and confirmed that the ship was “two miles from the course change”. When the CGOC watch officer sought further confirmation that the OOW intended to alter course to avoid the rocks, the OOW replied that “we will see later”.

The VTSO continued to monitor the ship but did not observe any alteration of course. At 0440 he therefore contacted the ship directly by VHF and emphasised that a grounding on the rocks five cables ahead was imminent and that there was clear water to the south. The OOW acknowledged the impending danger and indicated that he would change course, but his response was confused.

During the conversation, the OOW reduced the range scale on his radar and added a chart overlay to the display. At this point, he realised that the proposed course between the two islands ahead was unsafe as there was a shallow reef between them. he therefore selected hand-steering and put the rudder hard to starboard to try to steer away from the reef.

However, at 0443 the ship grounded on the Pentland Skerries at a speed of 7kts. The sea was calm with light airs and good visibility in darkness. The ship sustained extensive damage to its hull and was refloated seven days later.

The following lessons learned have been identified based on the information available in the investigation report and are not intended to apportion blame on the individuals or company involved:

This case study is drawn from the official UK MAIB investigation report.