In 2019, Carnival Corporation made further progress on its 2020 carbon reduction goal and committed to a new goal of 40% reduction in the intensity of CO2 emissions by 2030, in line with IMO requirements and the Paris Agreement, the company said in its newly launched sustainability report.

Carnival first shared its 2020 sustainability goals in 2015, identifying 10 key objectives, including reducing its carbon footprint, reducing waste generation, and others.

The company's latest sustainability report details progress made in 2019 to achieve and surpass those goals, while defining an initial set of sustainability commitments beyond 2020.

In terms of carbon footprint, the progress includes achievement of 29.1% reduction in CO2e intensity relative to 2005 baseline, which is additional progress on top of reaching the original goal of 25% reduction in carbon intensity in 2017. Despite these, Carnival has sometimes been at the center of concerns by environmental groups for its emissions.

Additionally, the company committed to a new goal of 40% reduction in its rate of carbon emissions by 2030 relative to 2008 baseline.

Meanwhile, Carnival continued the use of LNG in the cruise industry by introducing the second LNG-powered ship for its global fleet, Costa Smeralda, which joined AIDAnova as the first cruise vessels in the world to be powered by LNG.

It also became the first cruise company to join The Getting to Zero Coalition for decarbonization. 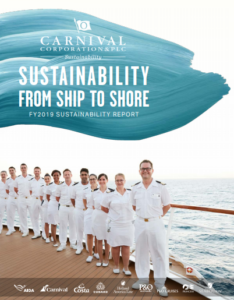