Cargo losses from ONE Apus may reach USD200 million 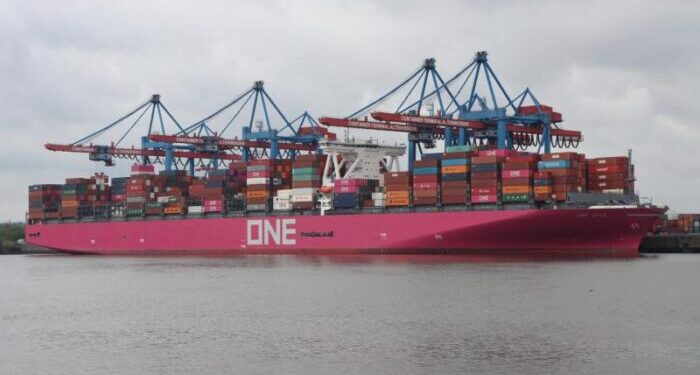 With a total of 1,816 containers lost overboard and what looks to be thousands more collapsed throughout the deck of ONE Apus, cargo losses, on the basis of average containerized cargo values, may reach USD200 million or more, according to shipping claims consultancy WK Webster, which is involved in the case.

The ship lost the containers overboard during severe inclement weather on 30 November in the Pacific Ocean, approximately 1,600 nautical miles northwest of Hawaii

WK Webster has realized a drone survey, which was obtained during the vessel’s approach to Kobe Port, and was analyzed as vital evidence in determining the cause of the incident.

Out of the 22 bays on deck, only 6 appear to have survived intact. With 20 rows per bay and with stack heights of 6-8 tiers, this would equate to approximately 2,250 containers potentially impacted.

It should be noted, however, that the great majority of the containers appear to be 40 foot units (FEUs) and therefore equivalent to approximately 4,500 TEUs. It is likely that some of the upper stowed containers were either empty or holding lighter weight goods.

Meanwhile, the task of removing containers from the deck of ONE APUS has now begun, after permission was granted by the Japanese Coast Guard on Friday. However, with no removal work being carried out during the weekend, only five containers had been removed as of Sunday, but operations continue as of Monday.

ONE Line has reported that the removal operation is likely to take over a month, although the WK Webster assessment finds this optimistic.

We and our experts are continuing to analyze the evidence received to date to assist in determining the cause of the incident. This will include the weather conditions encountered; what was done by the vessel to mitigate the impact of the weather; the lashing and securing equipment used and its adequacy; the stowage condition of the vessel on departure from Yantian; passage planning; amongst other issues.

The vessel owners / operators are not currently prepared to release the vessel’s stowage / bay plans. General Average has not been declared at the moment.