Before joining the UKHO, Peter served as a Rear Admiral in the Royal Navy, where he worked in a wide variety of appointments both at sea on operations and ashore. Notably, he commanded the frigate HMS CUMBERLAND on counter-piracy patrol off Somalia and the UK’s Ice Patrol Ship, HMS PROTECTOR, in Antarctica. In addition to this, he commanded the 44 units (aircraft carriers, destroyers, frigates, mine-hunters, patrol vessels, and the maritime explosive ordinance disposal teams) of the Portsmouth Flotilla.

Ashore, Peter Sparkes has served in Ministry of Defence acquisition appointments and was responsible for the development and introduction into RN service of the Warship Electronic Charting Display Information System. Prior to joining UKHO he served as the Chief of Defence Staff’s liaison officer in the Pentagon, Washington DC. 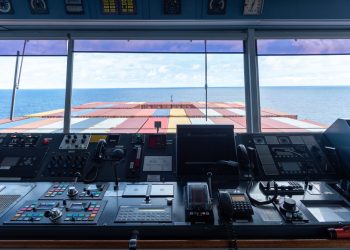 UKHO: The next generation of navigation technology will transform shipping

UKHO’s Chief Executive, Peter Sparkes, refers to the radical changes that S-100 suite of standards will bring to navigational safety, highlighting that the future is digital. In that regard, UKHO is currently in a transition phase up to 2026 as it is withdrawing from paper chart production, supporting users to unlock the benefits that digital navigation brings.