Another two armed robberies against ships in Singapore Strait

In its weekly report for 23-29 July, ReCAAP ISC informed of two CAT 4 incidents of armed robbery against ships in Asia. Both incidents occurred to tug boats towing barges while underway in the westbound lane of the Traffic Separation Scheme (TSS) in the Singapore Strait, a key area of concern in recent months.

While underway on 11 July, an unknown number of perpetrators boarded the barge from six small wooden boats. They stole scrap metal from the barge and escaped.

The master reported the incident to the Malaysian authority who dispatched a patrol vessel to investigate the incident. There was no confrontation between the perpetrators and crew. The crew was safe.

While underway on 25 July, an unknown number of perpetrators boarded the barge, Victory 9 which was loaded with scrap metal onboard.

The Singapore Vessel Traffic Information System (VTIS) contacted the master of tug boat, Virgo 29 via VHF and told him that some sampans were approaching the barge.

The master raised the alarm, and the perpetrators escaped. No item was stolen from the barge. The ship proceeded to the next port of call in Penang, Malaysia. 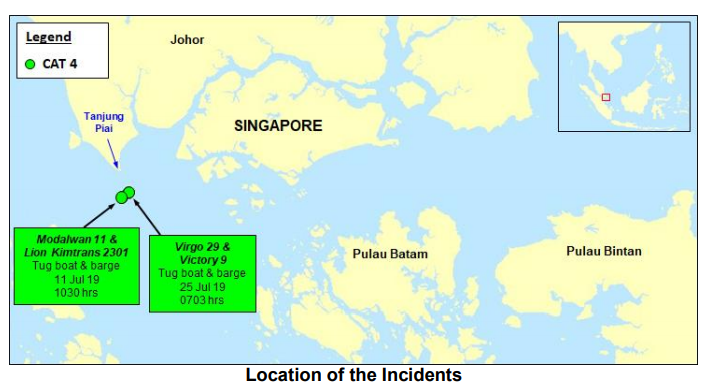 In its half yearly report for 2019, ReCAAP ISC reported an increase in the number of incidents onboard ships while underway in the Strait of Malacca and Singapore, with a total of eight actual incidents, compared to five (comprising three actual and two attempted incidents) during the same period in 2018.