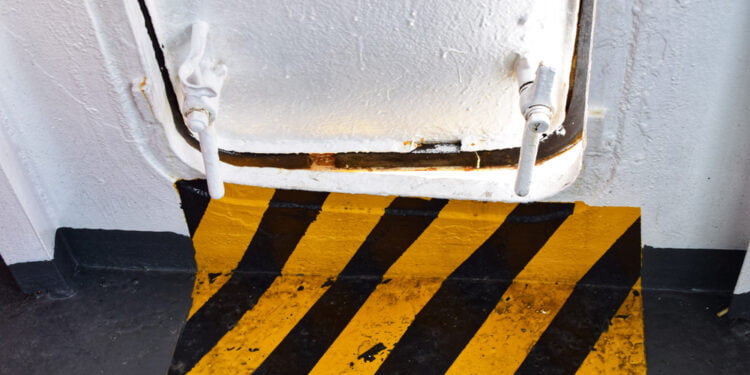 In its ‘Good Catch’ initiative, The American P&I Club highlights that it can be very dangerous to tie or “hold-open” fire doors, watertight doors, and doors on the weather deck.

The Club explains that the Good Catch initiative is a combination of short and focused guidance concentrated directly to the attention of seafarers to assure their understanding that ”When you identify a hazard before someone gets hurt, it’s a Good Catch.”

Fire doors are designed to stop the spread of fire and heat. They help isolate a fire and are key components of the structural fire protection on each vessel. Mariners have been injured and vessels have been damaged excessively because fire doors were tied open and the fire spread beyond where it should have been contained.

Watertight doors are critical to ensuring the watertight integrity of vessels. They prevent the spread of flooding and are essential for the vessel’s stability. They must remain closed and dogged at all times unless specific permission is given for them to be kept open temporarily for a specified purpose and time frame. They should never be tied open. Alarms for watertight doors should never be ignored or tampered with. Vessels have been lost because flooding progressed through open watertight doors when that boundary should have prevented further flooding.

Doors located on a weather deck, especially the main deck are also extremely important to the safety of the vessel. As such, they should never be latched or tied open when underway. Vessels have been lost from downflooding through open doors on the main deck. Also, mariners approaching the doorway from inside the superstructure have been seriously injured when unexpectedly swept off their feet by large volumes of sea water coming through an open door on the main deck.

#1 No injury is worth the minimal amount of time and effort saved because a fire door or watertight door or door on the weather deck was tied or held open.

#2 Fire damage can quickly add up to many hundreds of thousands of dollars if the fire spreads from where it originated to other parts of the vessel.

#3 Flooding damage can quickly put the entire vessel at risk if allowed to progress to other parts of the vessel.