The 74th session of the IMO’s Marine Environment Protection Committee (MEPC 74) concluded on Friday with a comprehensive set of guidelines for the consistent implementation of the 2020 sulphur cap.

Taking into account the 1 January 2020 global implementation of 0.50% sulphur limit for the fuel oil used on board and the 1 March 2020 carriage ban of non-compliant fuel, the Committee adopted the subject Guidelines.

In addition, the FONAR is to include a description of the voyage plan, evidence of past attempts, and future plans, to obtain compliant fuel, operational constraints that prevented the use of compliant fuel and records of previously filed FONARs.

A key challenge with distillate fuels is low viscosity. Low viscosity may lead to internal leakages in diesel engines, boilers and pumps. Equipment makers recommendations should be taken into account, and adequate testing, maintenance and possible installation of coolers, etc., may be performed.

Fuel temperature should also be kept about 10°C above the PP in order to avoid any risk of solidification, however this may not reduce the risk of filter blocking in case of high CFPP and CP.

It is essential to distinguish between “Fuel stability” within a single batch of fuel and “Fuel compatibility” between different fuel batches.

Regarding stability, the fuel must be stable and homogeneous at delivery and it is the responsibility of the fuel oil blenders and suppliers to ensure this.

It is recommended that ships have a commingling procedure. The procedure should mainly aim to ensure new bunkers are loaded into empty tanks to the extent possible. In the event that a ship finds itself possibly having to commingle a new bunker with bunkers already on board, then it is important that the ship determines the compatibility between the two said bunkers before comingling.

The reference test method shall be the total potential sediment test in accordance with ISO 10307-2:2009.

Tank cleaning is recommended when using a residual fuel tank for storing these new fuels. This is to avoid sludge that has gathered in these tanks from entering the fuel system.

Heating requirements, because of the cold flow properties of most of these new fuels, permanent heating of the fuel may be necessary to limit the risk of wax formation, also in storage. This is especially important in colder regions.

As for fuel treatment system, some of these new fuels may include cat fines and/or sediments and as a result need on board cleaning. Separator temperature and settings should be adjusted to the fuels’ viscosity and density.

The current ISO 8217:20176 specification for marine fuels considers the diverse nature of marine fuels and incorporates several categories of distillate or residual fuels, even though not all categories may be available in every supply location it covers all marine petroleum fuel oils used today as well as the 0.50% Sulphur fuels of 2020.

The General requirements, in the ISO 8217:20176 specification for marine fuels and characteristics, included in table 1 and 2 of ISO 8217:20176 identified safety, performance and environmental concerns and further considers the on board handling requirements, including storage, cleaning and combustion aspects of all fuel oils used today and the anticipated fuel blends of 2020, irrespective of the sulphur content of the fuel oils.

It is important that any new standards address and do not preclude the use of renewable and alternative non-fossil crude derived products, so long as they comply with the chemical properties specified for these fuel oils.

Survey and certification by Administrations

When conducting a survey according to regulation 5 of MARPOL Annex VI, the Administration should perform a survey of a ship to ensure that the ship complies with the provisions to implement the 0.50% sulphur limit. Especially, the Administration must check if the ship carries compliant fuel oils for use, based on the Bunker Delivery Note (BDN) onboard, any other document or fuel oil samples as appropriate consistent with the provisions of regulation 18 of MARPOL Annex VI.

All possible efforts should be made to prevent a ship being unduly detained or delayed. If a sample is analysed, sample analysis of fuel oils should not unduly delay the operation, movement or departure of the ship.

When a Party finds a non-compliance of a ship or a fuel oil supplier, the information of the non-compliance should be reported to the MARPOL Annex VI GISIS module (regulation 11.4).

Publication of information on non-compliant ships/fuel oil suppliers or a reporting scheme to IMO to be registered on centralized information platforms are proposed as elements of an effective enforcement strategy.

Several PSC regimes have managed to use the publishing of information regarding substandard ships/fuel suppliers as a deterrent to non-compliance. Port States also must report detentions of ships to IMO which may impact the future PSC targeting of the ship. The IMO GISIS database already makes available certain information related to non-compliances with the MARPOL Annex VI regulations.

Regulations 18.2.4 and 18.2.5 then require that the ship informs its Administration and the competent authority of the port of destination on the inability to obtain compliant fuel oil, with the Party to notify IMO of the non-availability. This notification is commonly referred to as a Fuel Oil Non-Availability Report (FONAR).

If a ship, in spite of its best effort to obtain compliant fuel oil, be unable to do so, the master/company must:

Identified potential safety implications include, but are not limited to, the following:

You may see the full Guidelines in the PDF below 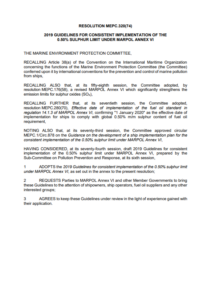