Video snap from the incident

USCG: Use of wrong materials contributed to deadly boat fire

Last year, a Coast Guard inspected vessel operating as a shuttle to transport passengers to and from an offshore casino vessel suffered a devastating fire not long after the vessel got underway from the dock.

Within minutes of observing that one of the vessel’s engines was overheating and a significant amount of smoke emanating from the vessel, the master altered course and quickly grounded the vessel in shallow water.

Passengers were then able to evacuate the vessel and wade ashore. One died and several were injured.

The fire was intense, fast moving and ultimately burned the vessel to the waterline.

Investigators determined a number of causal factors that contributed to ignite and intensify the fire.

This included a lack of company guidance regarding engine high-temperature alarms, lack of fire detection in unmanned spaces with exhaust tubing, insufficient preventive maintenance, insufficient crew training and documentation, and inappropriate material and design of the fuel tank level-indicator system.

The vessel’s fuel tank level indicating equipment is shown to the right in image A. It consisted of clear plastic tubing connected to a stanchion that was graduated to read the tank volume in gallons as shown in image B below.

Although this equipment did not initiate the fire, investigators determined that, once the fire spread to the fuel tank compartment, plastic materials in the level-indicating system melted and the resultant leak of diesel fuel fed and exacerbated the fire.

The vessel was certificated and inspected as a small passenger vessel, subject to the regulations of Title 46 CFR Parts 175-185 (Subchapter T). Applicable regulations regarding the fuel tank level indicating equipment are contained in Section 182.440 (a)(7), and read:

…Tubular gauge glasses, if fitted to diesel fuel tanks, must be of heat resistant materials, adequately protected from mechanical damage, and provided at the tank connections with devices that will automatically close in the event of rupture of the gauge or gauge lines. 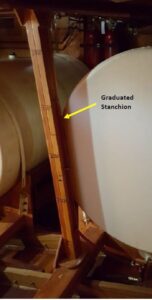 In general, the CFR requirements for fuel systems, from the smallest recreational boats to the largest passenger ships, require heat resistant materials be used in the design and construction of all components.

In addition to the level indicating tubing not being constructed of heat resistant material as required, the connection of the tubing to the fuel tank was not fitted with automatic closing devices as required by 46 CFR 182.440(a)(7). Instead, a ball valve was used.

There is no compelling evidence to suggest that US inspected vessels are not compliant with the CFR standards. However, given the volatile properties of diesel and gasoline fuels and the potential for fuel leaks to either cause or accelerate shipboard fires, USCG strongly recommends: