Video snap from the incident

The NTSB issued the official investigation report on the fire onboard the small passenger vessel ‘Island Lady’ on the Pithlachascotee River, near Port Richey, Florida, on 14 January 2018. NTSB held a public meeting in mid-December where it identified insufficient preventative maintenance program and lack of guidance for responding to engine high-temperature conditions as key causes of the accident.

About 1600 on the afternoon of 14 January 2018, a fire broke out in an unmanned space on the small passenger vessel Island Lady near Port Richey, Florida, during a scheduled transit to a casino boat located about 9 miles offshore in the Gulf of Mexico. 53 people were on board the Island Lady. After receiving a high-temperature alarm on the port engine, the captain turned the Island Lady around to return to the dock. During the return trip, smoke began filling the lazarette, main deck, and engine room. The captain deliberately beached the vessel in shallow water near shore to evacuate the passengers. All crewmembers, employees, and passengers evacuated the vessel by entering the water and wading/crawling ashore. Fifteen people were injured and transported to local hospitals; one passenger died in the hospital several hours after the fire. The Island Lady, valued at $450,000, was declared a constructive total loss.

NTSB determines that the probable cause of the fire onboard Island Lady was Tropical Breeze Casino Cruz’s ineffective preventive maintenance program and insufficient guidance regarding the response to engine high-temperature conditions, which resulted in the captain’s continued operation of an engine that was overheating due to a cooling water pump failure, leading to ignition of the exhaust tubing and surrounding structure. Contributing to the spread of the fire was the lack of fire detection in the vessel’s lazarette, which was not required by regulations and which allowed the fire to take hold unbeknownst to the crew.

As a result of this investigation, the National Transportation Safety Board advised: 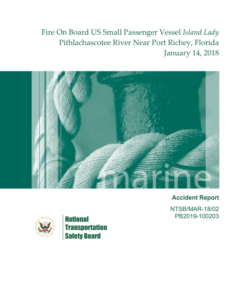