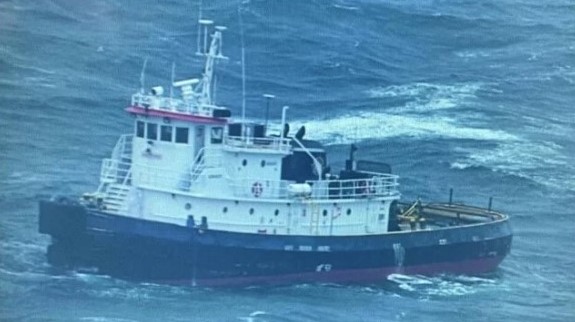 On January 14, the U.S. Coast Guard saved seven crewmembers from a drifting tug about 30 miles off the coast of Ocean City, New Jersey.

The crew of the St. Kitts-flagged tug Legacy sent out a distress call to Coast Guard Sector Maryland-National Capital. The vessel was under way with a 290-foot deck barge, headed for Guyana, when it fouled its starboard propeller on her tow line.

The crew tried  to regain the tow, but the line fouled the port propeller also, leaving the tug adrift. After that, the crew reported that they were preparing to abandon ship.

The cutter USCGC Lawrence Lawson went to the scene to help the crew of the Legacy. However, the Lawson did not manage to approach the tug because of rough surface conditions and the possibility that the line would foul its propellers.

Instead, the ship stood by within reach while other assets responded to the scene.

What is more, Coast Guard Sector Maryland deployed a Dolphin helicopter crew from Air Station Atlantic City and a Jayhawk aircrew from Coast Guard Air Station Elizabeth City to hoist the seven crewmembers from the vessel.

After all crew were taken safely aboard, the air crews delivered them to Ocean City Municipal Airport in Maryland. No injuries were reported.