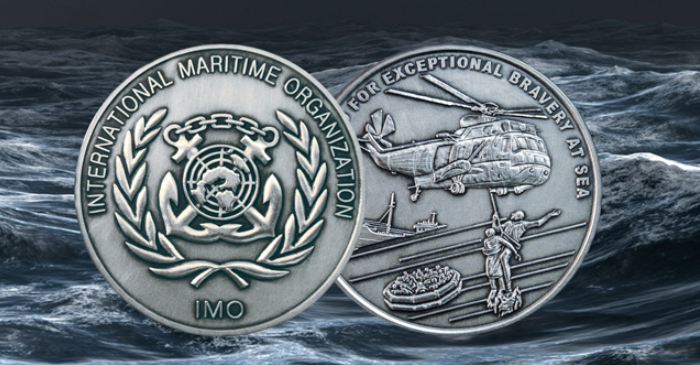 A Petty Officer from the US Coast Guard will receive the 2019 IMO Award for Exceptional Bravery at Sea, for rescuing four survivors from a life raft, in extremely high winds and heavy seas. The decision was endorsed by the IMO Council at its 122nd session in London, on 15-19 July.

On 14 November 2018, amid stormy seas, the crew of the rescue helicopter CG6032 was directed to provide assistance to the vessel, 70 miles off the Coast of Portland, Maine, US. The four people onboard were abandoning the vessel.

After taking off, the helicopter crew immediately encountered very strong turbulence and gusts up to 60 knots. Arriving on scene, the aircrew located a life raft, battered by raging seas.

AST2 Michael Kelly was immediately deployed into the cold water. Battling 20-foot waves and chasing the raft, which was constantly being blown away by 50-knot winds, he finally managed to reach the anchor line and pull himself to the life raft.

It was a critical situation with all four survivors suffering from hypothermia. Two were unable to swim, while the flooded raft was in danger of capsizing.

AST2 Michael Kelly pulled each survivor from the raft, one by one, swimming strongly through the storm to keep them afloat. Each was lifted into the swaying rescue basket to be hoisted to safety.

After each rescue, AST2 Kelly was forced to regain lost ground, as the heavy winds continued to push the raft further away.

The 2019 IMO Award for Exceptional Bravery at Sea will be presented during the IMO Awards ceremony, to be held on 25 November 2019 at the IMO Headquarters in London.

This annual award was established by IMO to provide international recognition for those who, at the risk of losing their own life, perform acts of exceptional bravery in attempting to save life at sea or in attempting to prevent or mitigate damage to the marine environment.