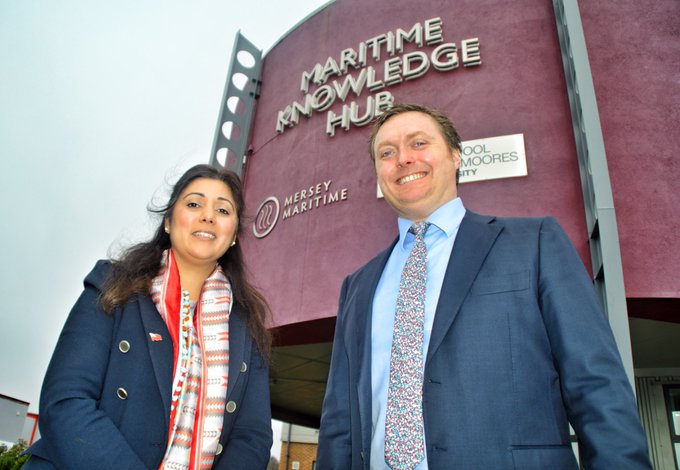 The UK Maritime Minister, Nusrat Ghani, recently said that the new Government is ready to “turbo boost” rail infrastructure in the North, while meeting with maritime industry leaders in Merseyside.

The Minister stated that “if the maritime industry didn’t do what it did this country would grind to a halt,” adding that she will continue to play a major role in the implementation of the Government’s Maritime 2050 strategy, which is looking to spark a new era of growth in the maritime sector, worth around £50bn to the UK annually. She also ensured it is at the forefront of the fight against climate change.

In fact, on Wednesday, January 22, Ms Ghani, a Minister in the Department for Transport, visited Mersey Maritime, the representative body for Merseyside’s £4bn powerhouse maritime sector, in order to speak with local businesspeople.

Chris Shirling-Rooke, Mersey Maritime Chief Executive stated that “We were delighted to facilitate the visit of the Maritime Minister to Merseyside today who we know to be one of the most passionate and strongest advocates for our industry at the heart of Government. From an informal discussion with a number of our key partners and member businesses, to viewing the site of the essential Wirral Waters project and finally to a tour of the Port of Liverpool, all that is good about the sector in the Liverpool City Region was on clear display."

Further to this, Ms Ghani acknowledged the huge investment Peel Ports had made in the Port of Liverpool with its £750m Liverpool2 container terminal and the need for better transport links to maximize the port’s potential.

More specifically, the Transport Secretary Grant Shapps commented that “Peel have done really good work at the Port of Liverpool… we want to match those aspirations. We need to focus on freight capacity and how quickly we can get freight criss-crossing the country.”

The Minister stressed that the Government was keen to push on with its strategy of reintroducing freeports to the UK with plans for a minimum of 10 around the country. It is said that a freeport is free trade zone, typically around a port, in which goods can be traded and manufactured without customs duties or taxes.

We are keen to consult with ports around the UK and we are asking them to put forward their submissions. A freeport does not have to be at a port. It can be located at a space between ports.

The Minister said it is vital to encourage UK ports to invest in new technology and added she was fully behind the drive to increase the number of women working in the maritime sector.