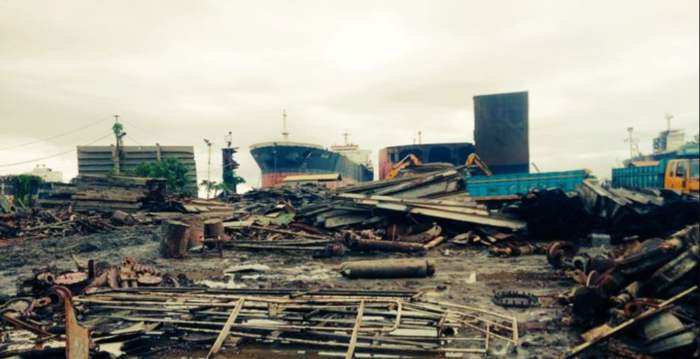 Above image is used for illustration purposes only / Credit: Shipbreaking Platform

As the NGO Shipbreaking Platform informed via its twitter account, three workers lost their lives and at least six were injured because of a toxic gas leak at a shipbreaking yard in Chattogram, Bangladesh. The incident took place on July 31, at the shipbreaking yard of MAK Corporation.

Sitakunda police station confirmed to Dhaka Tribune that the three men died after inhaling toxic fumes from the gas leak. The gas leaked when the workers were cutting pipe in the ship’s engine room. According to the NGO, the vessel where the incident occurred is the Medelin Atlas tanker.

This fatality follows the loss of another worker who had a fatal injury at Kabir Steel’s Khawja shipbreaking yard in Chittagong, Bangladesh, July 23. Given that the worker lost his life while cutting the ship ‘Ever Union’, today, Evergreen released a press statement expressing sympathy for this loss of life, while also disclaiming any responsibility, stating that the vessel had already been in the hands of a buyer.

Moreover, in May, the Chittagong shipbreaking area saw another fatality, as an explosion killed two workers, while five other workers suffered severe burn injuries.

In general, dirty and dangerous shipbreaking in Bangladesh has been strongly criticized both by global NGOs for many years, with marine pollution, hazardous waste dumping and unsafe working conditions, as well as the illegal exploitation of child workers, being among the key areas of concern.

Based on NGO’s reports, 193 ships were dismantled in the second quarter of 2019, as 146 vessels were sold to scrapping yards in South Asia.