Government ministers are in the process of carving out €20 billion worth of exemptions for the shipping industry in the new maritime carbon market (ETS), according to a new analysis, by Transport & Environment (T&E).

After the launch of the study, T&E called governments to put the polluter pays principle first and end unwarranted giveaways to an industry with a poor environmental record.

Governments want to gradually phase-in the ETS, whereas the EU Parliament proposed to start the scheme in 2023 without a phase-in. If scrapped, as per the Parliament proposal, emissions coverage would increase by 154 MtCO2 over seven years.

The ETS is a landmark opportunity to tax pollution from vessels and use that money to fund shipping’s decarbonisation. A delayed phase-in of the carbon market for shipping instead risks handing a large, unwarranted subsidy to big business

In the European Commission’s original proposal, all ships under 5000 gross tonnage (GT) are exempt despite sizeable emissions coming from these ships. Heavily emitting ships serving offshore oil and gas facilities are also excluded. The proposal only covers carbon dioxide, letting methane leaked from LNG ships off the hook.

The European Parliament removed most of the exemptions from the Commission’s proposal before the summer break, however, EU member states have put forward a much less ambitious proposal. Spain and Greece, for example, are seeking exemptions for ferries to islands, while Finland wants to exempt ice-going ships.

Now, the Council’s position gives a total of €20 billion worth of additional exemptions between 2023 and 2030 compared to the EU executive body’s landmark proposal in 2021. The European Parliament’s position, on the other hand, would increase revenues by €43 billion, as T&E’s analysis shows.

Considering all of the above, a joint letter from NGOs, urge the gross tonnage threshold for Monitoring, Reporting and Verification (MRV) Regulation, the Emissions Trading System (ETS) Directive and the FuelEU Maritime Regulation be brought down to 400 gross tonnage and that offshore and service vessels are included in these laws. 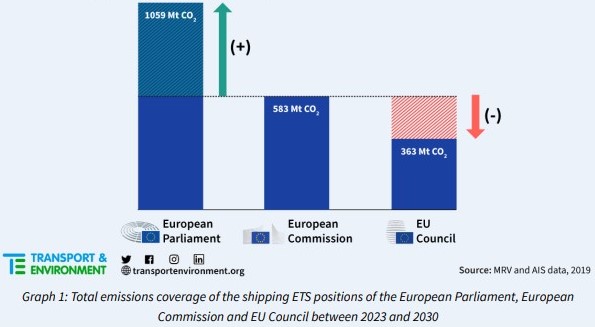 #1 Green tech is ready: The range of vessels, engines and technologies that our sector has invested in, show beyond a shred of doubt that green shipping technology is ready. These projects are testing grounds for technology that lower costs and pave the way for commercialisation of bigger projects. All, however, currently need government subsidies to operate. Until we have effective legislative framework in place for smaller ships, green shipping at every size will be undermined.

#2 Long-term investment decisions require predictability now: Businesses and financial institutions need predictability to invest. If a company does not know whether its investment in a zero-emissions vessel will pay off (i.e. by avoiding a carbon tax or overcomplying in FuelEU Maritime), it will refrain from investing in that vessel. Therefore, postponing the decision to include new vessels in the MRV and ETS, as the EU Council has proposed, will block investments and be contrary to the intended goals of the proposed legislation. This is problematic given the average age for ships between 400 to 5,000 GT is 39 years, 7 years older than other ships, meaning renewals and/or retrofitting of ships and propulsion systems will be urgently needed in a very short timeframe.

#5 Ending loopholes is a no-brainer for industry, the climate and human health: Emissions from ships exempted in the Commission’s proposals are significant: 25.8 MtCO2. Moreover, smaller ships tend to stay nearer to the shore, meaning the decarbonisation of those vessels will bring more benefits for human health than for other vessels. Supporting the decarbonisation of the smaller vessels will go hand in hand with reducing other pollutants. Assuming these vessels use the same fuel mix as the rest of the fleet, they are responsible for roughly 17,000 tonnes of sulphur oxide, 180,000 tonnes of nitrogen oxide and 7,000 tonnes of particulate matter (PM) (source: T&E), all disease-causing pollutants, meaning the loophole poses a serious risk to human health in coastal areas.

#6 Empower green European business: European businesses mainly build smaller ships below and above 5.000GT, whereas the biggest ships most often built in East Asia. Europe is also a leader in terms of green technology such as batteries, hydrogen and wind assist. Regulating smaller ships would therefore spark a boom in the European green shipping industry, not least for Europe’s shipyards and its maritime equipment industry. Furthermore, given the massive and growing demand for offshore vessels to support the growth in offshore wind, regulating these vessels can precipitate green European production of those vessels. Including all these ship types in the ETS would lead to a virtuous cycle where the EU reinvests revenues back into the green European shipping industry.