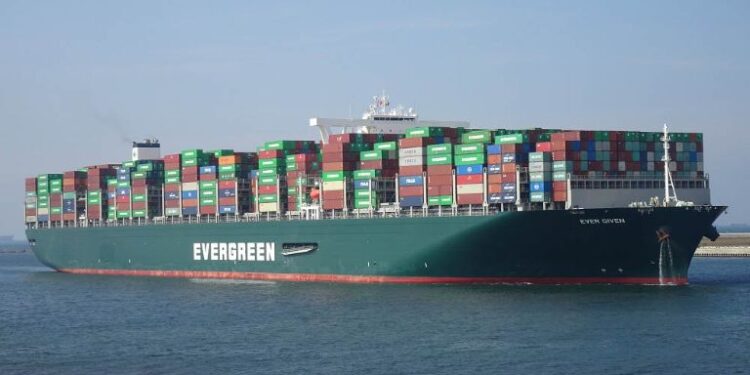 On March 29th, Evergreen Line confirmed that EVER GIVEN has been successfully refloated within the Suez Canal at approximately 15:00 local time. In order for the Canal to resume normal operation, the vessel is leaving the grounding site with assistance of tugboats.

According to Suez Canal Authority, on Monday 29th morning, the MV Ever Given was successfully refloated. ‘’This was the result of successful push and tow maneuvers which led to the restoration of 80% of the vessel’s direction.” said Admiral Osama Rabie, Chairman and Director, SCA.

Watch footage from @SvitzerGlobal, a Maersk strategic brand, of the Ever Given vessel floating as two of their tug boats assist in towing the vessel North. See the latest updates here: https://t.co/cVbYMUKsBy#Maersk #BusinessUpdate pic.twitter.com/hJS3sXwDad

Evergreen, the Taiwanese company that operates the ship, informed that the chartered vessel will be repositioned to the Great Bitter Lake in the Canal for an inspection of its seaworthiness. The outcome of that inspection will determine whether the ship can resume its scheduled service. Once the inspection is finalized, decisions will be made regarding arrangements for cargo currently on board.

View current position of the vessel at VesselFinder

We are most grateful to the Suez Canal Authority and all the concerned parties for their assistance and support through this difficult and unfortunate situation. We would also like to express our deepest appreciation to the crew who remain steadfast in their posts as well as the salvage experts and dredging team for their professionalism and relentless efforts over the past 6 days toward securing this outcome.

After one week being stuck in Suez Canal, the mega box is on the move again. ‘’A major challenge now lies ahead for already capacity-stressed ports in absorbing this additional shock to the stability of the seaborne transport system’’ Mr. Patrick Verhoeven, Managing Director, IHMA, commented.

In total, 367 ships with hundreds of thousands of TEUs of cargo capacity were stuck since March 23 when Ever Given ran aground. It is not clear when traffic will begin moving through the canal, but the Suez Canal Authority said “navigation shall be resumed immediately upon the complete restoration of the vessel’s direction.” However, experts say that when they move, port congestion will worsen.

It is still not clear if any vessels might be prioritized for passage. Current backlog should be cleared within four days.

…Hapag- Lloyd estimates, informing that they have not rerouted any more vessels via Cape of Good Hope.

EVER GIVEN is a 20,000 TEU-class container ship, currently leased by Evergreen Marine Corp. under a time charter agreement. The ship is deployed on a Far East-Europe service route. The massive container ship stretches more than 1,300 feet, which is almost as long as the Empire State Building is tall.