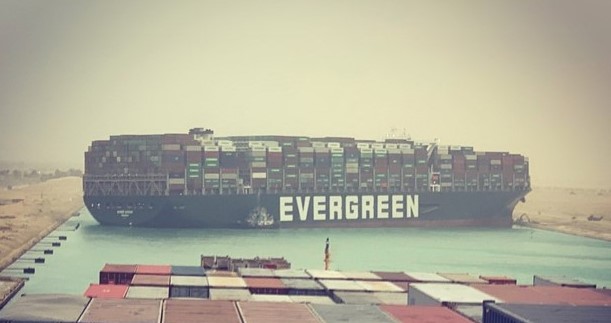 An ultra large container ship operated by Evergreen grounded on the Suez Canal on March 23, blocking the canal in both directions.

According to pictures that have been published, the Ever Given grounded and got stuck near the Red Sea entrance, blocking traffic in the canal.

As a result, a large number of ships is now waiting on either side of the waterway, to pass through th canal. In fact, as Bloomberg reports, more than 100 ships are waiting for their turn, to sail through the Suez Canal.

Monitoring the Suez situation, MarineTraffic commented that all those ships stuck in traffic in and around the Suez Canal are carrying valuable goods; hence ‘the delays are going to cause serious headaches for many around the world who will be forced to adjust their planning’. As informed, MarineTraffic has already been in touch with suppliers and logistics professionals who are busy monitoring and evaluating the situation.

What is more, the Associated Press cited information from an Egyptian official, noting that it would take at least two days in order for the ship to be removed. The official also blamed high winds as the cause of the accident.

Additionally, sources mention that the ship lost power before veering starboard, and its bow got stuck into the wall of the canal. Currently, efforts are being made to dig around the bow, with Egypt deploying multiple tugs in order to move the 399 m long vessel.

Finally, reporting on the incident, shipping agency GAC said that the vessel experienced a black out while transiting at 07.40 hours local time, March 23.

The waterway connects the Mediterranean to the Red Sea, providing the shortest sea link between Asia and Europe. In 2015, Egypt’s government opened a major expansion of the canal that deepened the main waterway and provided ships with a 35km (22 mile) channel parallel to it.