by The Editorial Team
in Accidents, Alerts 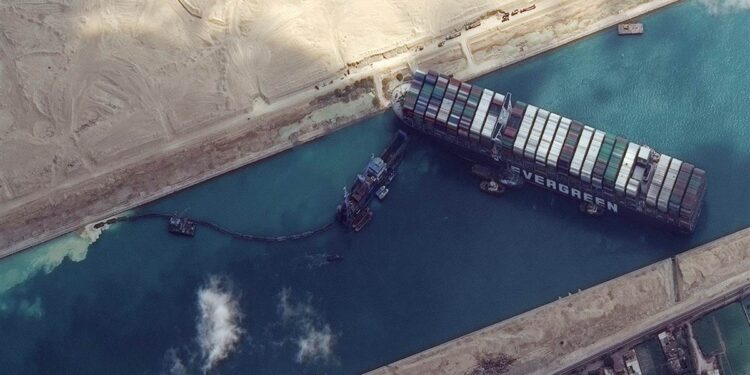 Source: Satellite Image of Ever Given

The Ever Given has been “successfully refloated” on the Suez Canal, according to Inchcape Shipping Services, a week after it ran aground in high winds blocking one of the world’s busiest shipping lanes.

Dredgers, excavators and tugboats worked throughout the weekend fighting changing wind conditions and the tide to dislodge thousands of cubic metres of sand caked around the mega-ship Ever Given, managing in the early hours of Monday to first move it, then pull it free, the Guardian reports.

Video footage from the rescue operation show the stern, the back of the ship, dislodged from the bank and facing the canal after significant movement. MarineTraffic said satellite data showed the ship’s bow has been moved, posting the following image in their twitter account.

According to Evergreen update posted on its website, although the rescue team had originally been scheduled to resume attempts to refloat EVER GIVEN at 14:00 local time in Egypt (20:00 Taipei time), after their site assessment the decision was made to delay that operation while more tugboats are summoned to join the effort. Accordingly, the refloating operation postponed to approximately 02:00 – 03:00 local time in Egypt (08:00 – 09:00 Taipei time) on 29th March.

The authorities will now keep the freed stern away from the bank as they work on pulling the front, or the bow, out. Salvage teams have partially freed and refloated the Ever Given, raising hopes that the vital trade route could soon reopen. Freedom for the stranded Ever Given ship would take its operator Taiwan-based Evergreen Marine Corp. out of a harsh global spotlight, comments Forbes.

The Suez Canal has served as a shortcut for cargo ships since it was built in 1869. It links the Mediterranean Sea to the Red Sea, dividing Asia and Africa. According to data by the Suez Canal Authority, on average, over 50 ships passed through the canal per day in 2020.

Salvatore Mercogliano, Associate professor of history, Campbell University commented on CNN how this incident affects many other industries and what the blocked canal means for the global trade in general.  ”All of this means a slow down in the delivery of goods, fuel and essential material between Asia and Europe. Factories depending on parts from Asia may have to close, and essential goods and products to battle Covid-19 may be inaccessible. Fuel prices, already high in Europe, could further increase.” he said.

View herebelow a video by FleetMon shows a simulation of EVER GIVEN grounding in Suez Canal on 23rd of March, 2021