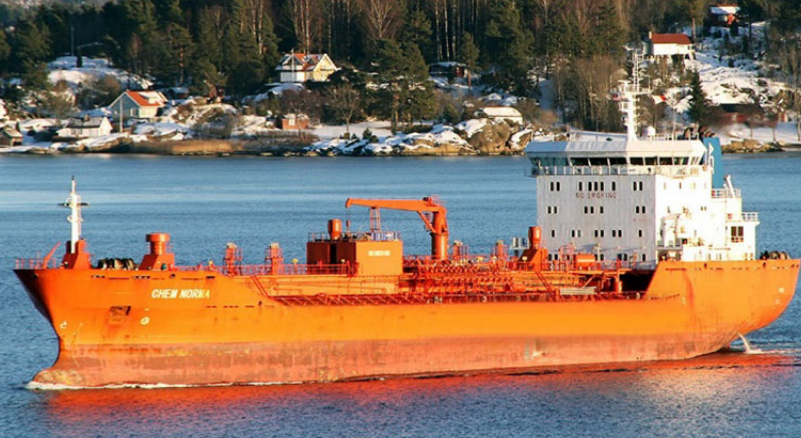 The Transportation Safety Board of Canada (TSB) issued an investigation report on the steering gear failure and grounding of the product/chemical tanker 'Chem Norma', off Morrisburg, Ontario, in 29 May 2018.

On 29 May 2018, the Marshall Islands–flagged product/chemical tanker Chem Norma was proceeding upbound the St. Lawrence Seaway, carrying a cargo of 11 119 tonnes of alkylate (UN1268) bound for Sarnia, Ontario.

The bridge team at the time consisted of the master, a pilot, the third officer, a helmsman, and a lookout. At 0415, as the helmsman was steering the vessel in follow-up mode and applying small corrections to maintain the vessel on a course of 238º gyro, the rudder unexpectedly went hard over to starboard while the vessel was steaming at a speed of 11 knots.

At that time, the steering gear system was operating on System No. 1 with the No. 2 steering pump running. The vessel sharply veered to starboard and exited the buoyed channel, entering the charted anchorage area off Morrisburg, Ontario.

The master brought the rudder to hard-a-port while the vessel was still in non-follow-up mode, and the main engine was ordered to full ahead. Despite these actions, the Chem Norma ran aground on the Seaway’s northern bank, outside the anchorage area, coming to a stop 2 minutes and 25 seconds after the steering gear malfunction.

Approximately 650 tonnes of cargo were transferred from tanks No. 2, 3, and 4 starboard to tank No. 6 port, and the vessel was refloated on 03 June 2018 with the assistance of 3 tugs and the managed rise of the St. Lawrence Seaway’s water levels.

In this occurrence, although the precise cause for the temporary failure of the Chem Norma’s steering gear control system could not be determined, a plausible scenario is a temporary mechanical hanging that held contacts 5 and 9 closed on relay 5K3, triggering a hard-a-starboard order on the steering gear.

On 27 July 2018, the TSB sent Marine Safety Information Letter 04/18 to the company, outlining the results of the examination and failure analysis performed on control relays 5K1, 5K2, 5K3, and 5K4, emphasizing the poor condition of relay 5K3 and the unsuitability of this particular model of relay to handle the severe conditions produced by inductive loads such as solenoids.

The letter also identified the possible source of the failure of the steering gear system and warned the company that the same loss of steering control might occur on any of the Chem Norma’s 4 sister vessels fitted with a similar steering gear control arrangement.

The vessel owner also contacted the steering system manufacturer to request a type of control relay that is designed to better handle the severe conditions produced by the inductive loads found in the vessel’s steering system. 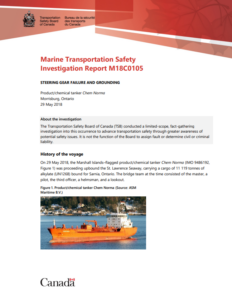