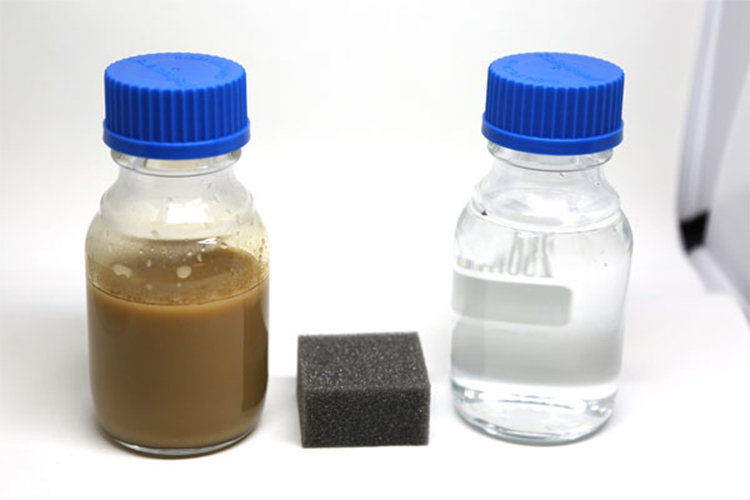 U of T researchers have developed a chemically modified sponge that can remove emulsified microdroplets of oil from wastewater with more than 90 per cent efficiency in just 10 minutes / Credit: University of Toronto / Kevin Soobrian

University of Toronto researchers have developed a new strategy to remove tiny oil droplets from wastewater with more than 90% efficiency in just 10 minutes, using a sponge.

Oil extraction operations such as hydraulic fracturing, or fracking, produce nearly 100 billion barrels of oil-contaminated wastewater each year. Because the oil is in the form of tiny droplets rather than a large oil slick, we can’t use the same strategies we would use to clean up a surface spill,

...says Chul Park, a professor in the department of mechanical and industrial engineering in the Faculty of Applied Science & Engineering.

The work, undertaken by Pavani Cherukupally, Park’s graduate student, continued expertise from a previous prototype, that could remove more than 95% of the oil in the samples tested.

Researchers developed a chemically modified sponge that can remove emulsified microdroplets of oil from wastewater with more than 90% efficiency in just 10 minutes.

However, there were two major drawbacks to this system:

The optimal pH for our system was 5.6, but real-life wastewater can range in pH from around four to 10. As we got toward the top of that scale, we saw removal drop off significantly, down to maybe 6 or 7%,

In her latest work, published in the journal Nature Sustainability, Cherukupally partnered with U of T chemists Wei Sun and Annabelle Wong in the lab of Geoffrey Ozin, a professor in the department of chemistry in the Faculty of Arts & Science, to chemically modify the foams.

By adding tiny particles of a material known as nanocrystalline silicon to the foam’s surface, they were able to control its critical surface energy.

The critical surface energy concept comes from the world of biofouling research – trying to prevent microorganisms from attaching to surfaces such as the hulls of ships,

The current prototype works over a much wider pH range than the previous version. It is also faster. At pH 5.6, the system removes more than 92% of the oil in just 10 minutes.

The oil is easy to extract using common solvents, enabling it to be recovered for use. The sponge can be also be re-used – the team tested it 10 times and saw no degradation in performance.

Current strategies for oil spill cleanup are focused on the floating oil slick, but they miss the microdroplets that form in the water column. Though our system was designed for industrial wastewater, adapting it for freshwater or marine conditions could help reduce environmental contamination from future spills,

The research was supported by the Natural Sciences and Engineering Research Council of Canada and Fisheries and Oceans Canada, among others.

Earlier in 2019, a team of engineering researchers at Canada's University of Calgary developed a sponge for soaking up aquatic oil spills, called “magnetic boron nitride (MBN)”.