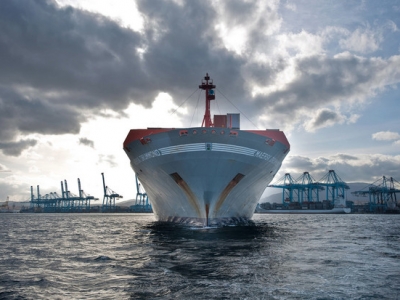 If ships were obliged to immediately cut their speeds, they could also slash 15% of their carbon emissions and save billions in lower ship fuel bills, according to a new report.

The report, 'Regulated slow steaming in maritime transport' by the consultants CE Delft, says that if global average maritime speeds were reduced by 10%, carbon dioxide savings would rise to 19%, even after the cost of building and operating new ships to make up for lost capacity was considered.

"Regulated slow steaming can produce emissions reductions by 2030 and 2050 which rival any other reduction option being considered at IMO or EU level," said John Maggs of Seas At Risk, one of the groups that commissioned the report."And it can do so with a sizeable economic gain."

TheInternational Maritime Organisation, or IMO, is the UN body that oversees shipping safety and pollution.

International shipping currently accounts for some 4.5% of global CO2 emissions but unless action is taken, the UN Environment Programme predicts that this figure could rise to between 10% and 32% by 2050.

In 1997, the Kyoto Protocol called on the IMO to reduce emissions from international shipping but agreement has proved elusive.

Last May, EU finance ministers called for the IMO to "develop without delay a global policy framework that avoids competitive distortions or carbon leakage" and suggested carbon pricing of maritime emissions as a potential source of revenues.

As frustration with the shipping industry's lack of urgency in tackling the emissions issue mounted, in July EU Climate Action Commissioner Connie Hedegaard said that it was "high time" for an IMO agreement.

"Much as we prefer a global solution," she continued, "the member states and the European Parliament have asked the Commission to present a possible proposal to reduce shipping emissions for 2012 in the case that the IMO fails to find a solution."

However, the EU's trade directorate strongly opposes any marshalling of shipping into the EU's Emissions Trading System, and new proposals might need to wait until the current row over the inclusion of aviation is resolved.

The CE Delft report was reportedly commissioned after the IMO dismissed speed reduction as a way to tackle climate change impacts from ships.

"The case for speed reduction is as compelling as it is obvious; it's time for regulators to sit up and pay attention," said Bill Hemmings of Transport & Environment, which co-commissioned the report.

The report was launched as the IMO opened its 63rd Marine Environment Protection Committee meeting. The shipping body is also resuming its discussions on technical, operational and market-based approaches to tackle CO2 emissions. Maersk, one of the world's largest shipping operators, has held extensive trials into slow steaming, which it describes as "a win-win situation" for the industry and environment.

Speed controls on shipping could save billions in lower ship fuel bills, cut air pollution and enable the shipping industry to play a full part in tackling climate change according to a new report.

An immediate emissions cut of 15% is achievable, according to the study into the feasibility, costs and benefits of regulated slow steaming,
commissioned by environmental groups Seas At Risk and T&E and undertaken by consultants C.E. Delft.

The report was prompted by a premature decision to dismiss speed reduction as a way to tackle climate change impacts from ships at the International Maritime Organisation (IMO). That decision came despite the fact that the economic crisis had already led to many ships slowing down to save fuel.

Reducing average speeds by 10% will reduce emissions by 19% across the world fleet even after building and operating new ships to make up for lost capacity. The study found that emissions cuts from slower speed are immediate, don't require prior investment, and have no adverse impact on ship operations.

The study will be launched today (28 February) at a side event at the 63rd session of the UN International Maritime Organization's (IMO) Marine Environment Protection Committee (MEPC) in London.

John Maggs of Seas At Risk said: "Regulated slow steaming can produce emissions reductions by 2030 and 2050 which rival any other reduction option being considered at IMO or EU level, and it can do so with a sizeable economic gain."

"If we are serious about tackling shipping GHG emissions and making sure that the shipping industry contributes its fair share to tackling climate change, then we must avert any post-economic crisis emissions spike. The IMO - and industry - must look again at regulated slow steaming and give it full and proper consideration alongside their work on developing a market-based measure."

Bill Hemmings of Transport & Environment said: "This study refutes all the knee-jerk objections to mandatory speed reduction that have been trotted out. The case for speed reduction is as compelling as it is obvious; it's time for regulators to sit up and pay attention."

"Sections of the shipping industry have slowed down for commercial reasons but industry refuses to consider this option as an environmental measure and wants to speed up again once the economic crisis is over even though slow steaming is cost free and flexibility options can be considered for the relatively small section of the market that needs to operate faster. The industry seems to be acting against its own interests on this one."

The report's presentation coincides with the resumption of deliberations at IMO concerning technical, operational and market-based approaches to tackle GHG emissions from shipping.

Maersk, one of the world's largest shipping operators, has reported extensively on its trials of slow steaming, confirming that technical concerns surrounding the impact on ship engines were completely unfounded.

You may view the Regulated slow steaming in maritime transport Report by clicking here.

Also view the Executive Summary of the study by clicking here