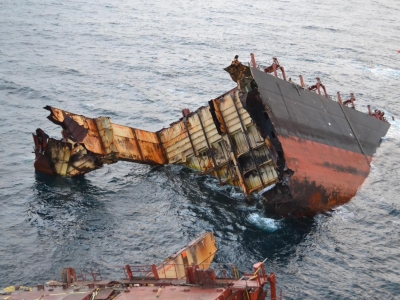 A report released Thursday by New Zealand investigators on how a cargo ship ran aground on a reef last year paints a picture of a crew trying to take short cuts in order to stay on schedule.

On Oct. 5, the Rena smashed into the well-charted Astrolabe reef near the port of Tauranga, spilling 400 tons of fuel oil, fouling pristine beaches and killing thousands of seabirds in what has been called the country’s worst maritime environmental disaster.

The preliminary report by the Transport Accident Investigation Commission describes how the captain and navigating officer deviated from their planned route several times as they tried to make a 3 a.m. deadline to reach the port. They tried to plot a course that would have taken them much closer to the reef than recommended in navigational manuals.

About two hours before the accident, the Tauranga port radioed the crew to say they needed to make “best speed” before tide changes would bring hours of delays getting into port. Soon after that, the captain and navigating officer agreed they’d take a short cut, taking them within a mile (1.6 kilometers) or so of the reef instead of the recommended three (4.8 kilometers).

Nine minutes before the ship hit the reef, the captain noticed an echo on the radar screen but maintained his course, according to the report. The captain showed the echo to his watch keeper, and together they used binoculars to peer into the night through the bridge window but couldn’t see anything.

The ship was running on autopilot at the time of the accident, according to the report, and the crew were relying on paper charts to plot their course, without the benefit of modern electronic charts or an integrated navigational system which could have automatically corrected for differences between the direction the ship was headed and the actual course it was taking.

Those differences are typically caused by tides and weather conditions which can push a ship off course.

The captain and navigating officer last month pleaded guilty to mishandling the vessel and altering ship documents after the crash. The court has suppressed the names of the men, who are both Filipino. Their names will remain suppressed until their sentencing, which is set for May 25.

New Zealand’s government last month estimated the cost of the cleanup at 130 million New Zealand dollars ($108 million). Most of the costs have been met by insurers.

The Rena is owned by Greek-based Costamare and was chartered by the Swiss-based Mediterranean Shipping Company.