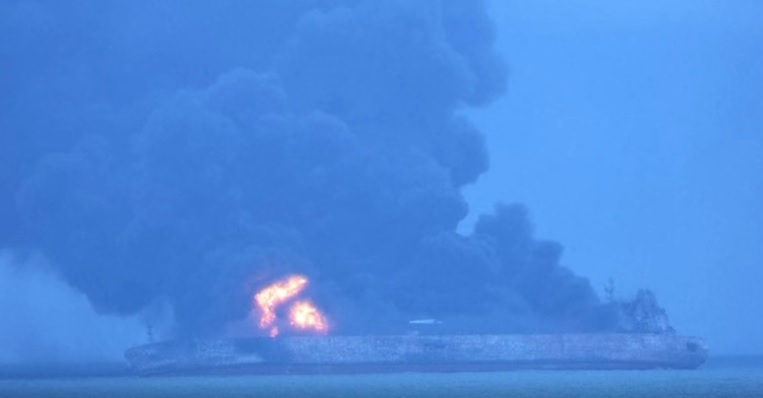 The oil spill from the Iranian tanker 'Sanchi', that sank off China, has created four separate slicks covering a total area of 100 square km (or 39 square miles), which is almost equivalent to the size of Paris, according to Chinese authorities.

The tanker, operated by National Iranian Tanker Co, was sailing from Iran to South Korea, carrying 136,000 tonnes of condensate, when it collided with the ‘CF Crystal’, about 160 nautical miles off the coast, near Shanghai and the mouth of the Yangtze River Delta, and went ablaze. After burning for more than a week, it eventually sank on Sunday, causing a major oil spill.

At the time of the accident, the ship was carrying a total of 32 crew members, all of whom are presumed as dead, with only three bodies recovered so far.

According to data provided by satellite, the largest spill covers about 48 km2 and the area with the smallest spill is about 5.5 km2, the China's State Oceanic Administration said. Earlier on Tuesday, the agency had informed about two slicks of about 69 km2 and an additional 40 km2 area of "scattered" oil.

Experts say both the crude oil that was carried by the Sanchi and the fuel that was used to power the tanker can be really toxic to marine environment. The type of oil carried by the ship does not form a traditional surface slick when spilt, but is much harder to separate from water, while fuel oil is relatively easy to contain, because volumes are lower and its viscosity means it’s easier to extract from water. However, both are devastating to marine life.

Since the vessel first collided, environmental groups and officials have been expressing concerns over the ecological impact on the regional wealthy marine ecosystem.

“We are worried about the potential environmental impact that could be caused by leakage from the vessel that was holding almost 42 million gallons of condensate oil," had said earlier Greenpeace East Asia campaigner, Rashid Kang.

According to Greenpeace, the area of the sinking is a spawning ground for many species, such as the swordtip squid, as well as a migratory pathway for several marine mammals, such as humpback whales and gray whales.

The Chinese Administration said it will continue to carry out monitoring from the air and sea, to assess the impact of the environmental disaster.