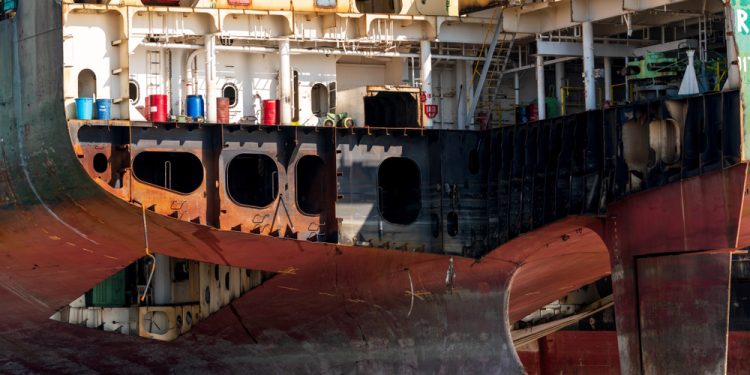 The NGO Shipbreaking Platform published its quarterly publication, informing about the shipbreaking industry in Bangladesh, India and Pakistan.

Providing an overview of accidents that took place on the beaches of South Asia and recent on-the-ground developments, including our activities, we aim to inform the public about the negative impacts of substandard shipbreaking practices as well as positive steps aimed at the realisation of environmental justice and the protection of workers’ rights.

On October 16, a worker injured his head due to a fire extinguisher blast at M.A. Shipbreaking while dismantling the AFRAMAX RIVER. The worker was transported by locals to Chattogram Medical College Hospital, where he entered the intensive care unit.

On December 18, operations on the same vessel caused burn injuries to the face and chest of another worker, while he was cutting an oi l pipe.

On October 22, two workers suffered burn injuries when a cutting torch blasted at H.M. shipbreaking yard during the dismantling of the vessel URANUS.

On October 27, a worker suddenly felt sick while cleaning an iron sheet and later died a t the hospital. The worker was involved in the breaking of the NEW SMILE.

On November 4, a worker got his fingers broken by a falling iron plate during an illegal night shift at a Kabir Group’ s yard in Shitalpur while dismantling the vessel EM LONGEVITY.

On November 12, a worker got hit on his head and backbone by a falling steel plate on the vessel MINISTAR.

On December 6, a worker got injured by an iron plate while working on the vessel SHINY.

The Maritime Board of Andhra Pradesh is developing a ship recycling site off the beach, with the potential use of a dry -dock. This project comes a long with four new deep-water ports to turn Andhra Pradesh into a major contributor to coastal economic activity.

Whereas the setup of dry -docks is supported from an environmental and human perspective, it is import ant to keep in mind that the downstream waste management, including the correct leaning of steel plates, and the protection of worker s ’rights must be correctly addressed to meet the highest standards, which in the present moment are represented by the European Ship Recycling Regulation and are much stricter than those set up by the Hong Kong Convention.