ReCAAP ISC reports a 19% increase in number during 2017 (compared with 2016) in its Annual Report of Piracy and Armed Robbery against ships in Asia. ReCAAP ISC also presents the areas where the most incidents occurred and those which were the most safe.

The annual statistics and analysis were presented at the 9th Nautical Forum in Singapore, jointly organized by ReCAAP ISC, the Maritime and Port Authority of Singapore and the Singapore Shipping Association.

Highlights of the ReCAAP ISC Annual Report include the following:

As far as certain areas that faced the most troubles, these are:

On the other hand, improvement was noticed in:

“While the number of incidents in 2017 continue to be among the lowest in the past decade, the increase that occurred over the last year is a reminder that there is no room for complacency in the fight against piracy and armed robbery against ships, and underscores the need for enhanced vigilance among all stakeholders,” said Masafumi Kuroki, Executive Director of ReCAAP Information Sharing Centre.

Due to the increased piracy incidents in Asia, ReCAAP ISC provided operators with some advisory, which can be summarized as following: 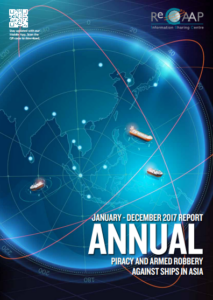