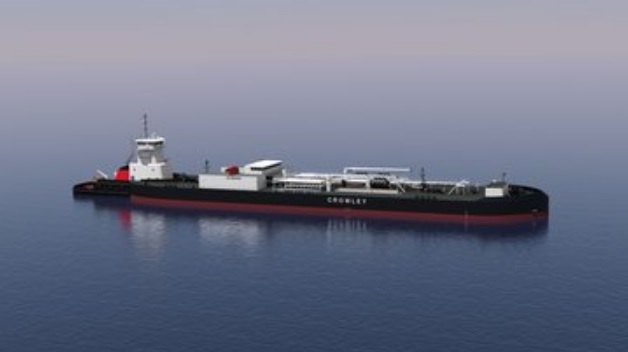 Crowley’s marine solutions group has been contracted to provide vessel construction management services in the shipyard from final design phase through to delivery. Once built and deployed, Crowley will operate the ATB under a long-term charter with Alaska-based Petro Star Inc., a wholly-owned subsidiary of Arctic Slope Regional Corporation (ASRC).

The Alaska-class vessel will be built at Bollinger Marine Fabricators Shipyard, in Amelia, La., with an expected delivery scheduled for the fourth quarter of 2019. The contract with Bollinger includes an option to build a second ATB.

“While Crowley has operated ATBs in Alaska in the past, this will be the first ATB of its size and class that will be dedicated to the Alaska market,” said Rocky Smith, Crowley Fuels’ senior vice president and general manager.

The tug’s main GE engines, as well as the barge engines, meet US EPA’s Tier IV environmental standards for emissions-reducing performance requirements. In addition, it features deep-well pumps in each cargo tank, as well as all-electric deck machinery to reduce the risk of hydraulic spills. The barge is also outfitted with spill response gear and two hydraulic boom reels with inflatable booms to support spill response efforts.

The ATB, to be named Oliver Leavitt, was designed under the SOLAS Convention and it will be classed with ABS.