Panama Canal Expansion to boost US container port traffic by 10% 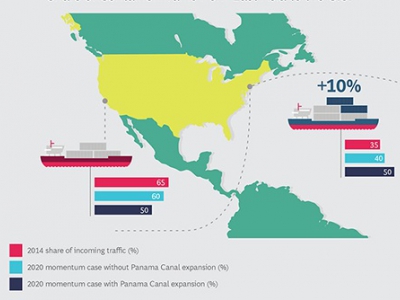 According to BCG Report

Following the Panama Canal expansion in 2016, up to 10 percent of container traffic to the U.S. from East Asia could shift from West Coast ports to East Coast ports by 2020, according to new research conducted by The Boston Consulting Group (BCG) andC.H. Robinson. Rerouting that volume is equivalent to building a port roughly double the size of the ports in Savannah and Charleston.

The researchwhich involved extensive scenario analyses based on differing levels of demand, capacity, and costsis believed to be the most comprehensive public study of how the canals expansion will likely change the way cargo moves, by both water and land, into and within the U.S. The findings have been released in a report titledWide Open: How the Panama Canal Is Redrawing the Logistics Map.

The $5 billion expansion will permanently alter the competitive balance between ports on the East and West coasts. With global container flows rising, West Coast ports will still handle more traffic than they do today, but they will experience lower growth rates and their market share will likely fall.

Goods shipped from East Asia through West Coast ports are currently transported by rail and truck as far east as the Ohio River Valley. The canals expansion will permit big, efficient post-Panamax container shipswhich have two to three times the capacity of current vesselsto reach the East Coast. Those ports will then become more cost competitive because it is cheaper to move cargo by water than over land. West Coast ports, however, will remain the destination of choice for shippers who need to use the fastest routes possible.

After the Panama Canal expands, the battleground region in which East and West Coast ports compete for customers will likely grow and shift several hundred miles west toward Chicago and Memphis, encompassing a region that accounts for about 15 percent of U.S. GDP.

With the Panama Canals expansion, shippers will have more options and carriers will compete to provide those options, said Peter Ulrich, a BCG partner and the leader of the firms transportation and logistics topic area in North America. Rail, truck, and ocean carriers will all have to reconsider their routing and investment decisions. And shippers will need to make fundamental choices, such as where to locate distribution centers and how to segregate their cargo heading for the heartland.

In 2014, about 35 percent of container traffic from East Asia to the U.S. arrived at East Coast ports. According to the report, current growth trends would push that share to 40 percent by 2020 without the canals expansion. But with the canal expansion in place, the East Coasts share could reach 50 percenta 10 percent increase in market share.

On the East Coast, the New YorkNew Jersey port complex and the Southeastern ports of Norfolk, Savannah, and Charleston are well positioned to gain traffic by virtue of their relative proximity to the battleground region and attractive rail routes to major markets. As the East Coasts largest ports, they are also likely to be on the routes of the post-Panamax vessels, which tend to make fewer, longer stops than smaller vessels.

Companies accustomed to shipping to the West Coast and relying on relatively fast rail service to cover most of the country will need to take a much more segmented and dynamic approach, said Sri Laxmana, the director of ocean services at C.H. Robinson. When time is of the essence, that routing may continue to make sense. But for other products, the savings of shipping through the Panama Canal will likely outweigh the extra time in transit.

A copy of the report can be downloaded atwww.bcgperspectives.com