Offshore investments to rebound from 2021

Offshore investments are expected to rebound from 2021 and oil and gas operators will be looking for yards to build new facilities, according to Rystad. 40% of these contracts are expected to be floating production storage and offloading (FPSO) units in the next five years.

While higher, budgets will be quite cost-wary and among Asian rivals, Chinese yards stand better-placed to attract them, a Rystad Energy analysis shows.

Asia is the undisputed market leader for construction and conversion of FPSO vessels, with leading fabrication yards for hull construction mainly located in China, Singapore, South Korea and Japan.

Rystad Energy has compared hull construction costs for a newly built FPSO among these yards and discovered that, despite scoring low on productivity, Chinese yards are the most competitive with 30% lower prices than their Japanese rivals. Namely, building a hull in a Chinese yard costs on average $94 per cubic meter. South Korea follows with $111, Singapore with $128 and Japan with $135 per cubic meter.

Even if Chinese productivity is the least competitive, low wages compensate for the productivity deficit, allowing the country to offer the most competitive hull construction costs in the region. And with up to 50 FPSO projects possibly committed in the next five years, Chinese yards are well-placed to tap considerable contract opportunities

Looking at the mean hourly wage in USD for construction workers, China has the lowest labor rates with an hourly wage amounting to less than $5, followed by Singapore with $11.8 per hour. Japan and South Korea have more than twice the Chinese mean hourly wage with of $15.6 and $16.5, respectively. 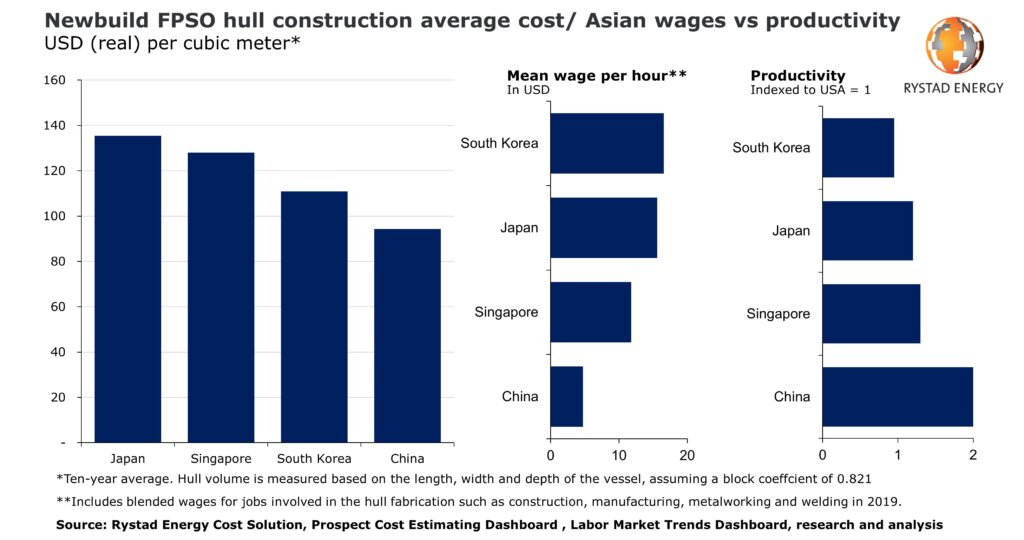 Finally, prices for structure material products have impacted the Asian countries differently since 2014. South Korea has seen the largest fluctuation, recording the deepest fall and the steepest growth during the past six years because of strong volatility in the South Korean won exchange rate. South Korean prices for structure material products declined 23% from 2014 to 2016 and almost returned to 2014 levels in 2018, before falling again by 10% this year.

China, Singapore and Japan have experienced less volatility, with Chinese prices remaining relatively stable since 2014, fluctuating 10% at most and currently trading 8% lower than 2014 levels.