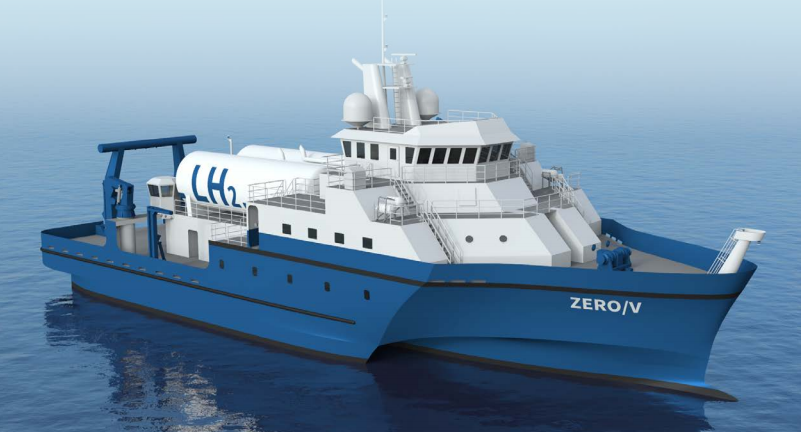 A new ship design and feasibility study, led by Sandia National Laboratories, in cooperation with naval architect Glosten, the Scripps Institution of Oceanography and DNV GL, could soon make marine research pollution-free for both the air and the ocean.

The goals of this feasibility study were to determine the technical, regulatory, and economic feasibility of a coastal research vessel powered solely by hydrogen fuel cells, assess the environmental benefits, and determine the prospects for refueling such a vessel at the expected points of call.

Hydrogen fuel cells are zero-emissions technology, and, if used instead of diesel engines to power research ships, they won’t contaminate air or water samples collected in sensitive ecological areas, while they make almost no noise.

Despite these and many other advantages, the feasibility of a hydrogen-powered research vessel has never been studied or proven. However, a Sandia report released this month shows it is technically and economically feasible to build such a vessel in a manner consistent with marine regulations. The project team nicknamed the vessel the “Zero-V,” short for zero-emissions research vessel.

One of the biggest additional benefits of using hydrogen to power a boat is the absence of ecologically damaging fuel spills. According to Sandia chemist and project lead Lennie Klebanoff, it is impossible to have a polluting hydrogen spill on the water. More buoyant than helium, hydrogen rises on its own and eventually escapes into outer space.

The Zero-V project evolved from earlier Sandia work on the SF-BREEZE, a hydrogen-powered passenger ferry designed to operate in the San Francisco Bay. Prior to the SF-BREEZE, there hadn’t been a project that looked at the technical as well as economic feasibility of powering large, fast commercial boats with hydrogen, according to Joe Pratt, who led the SF-BREEZE project.

All the plan elements, including ship design, weight distribution and refueling options had to be re-evaluated for the Zero-V.

Instead of going fast for short periods and carrying a lot of people, the research vessel goes slower for much longer distances, carries fewer people and must allow the operation of sensitive scientific instrumentation. Or in other words, “The research vessel is a different animal from a passenger ferry.

Whereas the SF-BREEZE requires refueling after 100 miles, the Zero-V needs to go at least 2,400 miles or 15 days before requiring a refuel; enough to get from San Diego to Hawaii. Given the great distances it needs to travel, a refueling terminal in one central location isn’t what is needed.

The Sandia team found an innovative approach that allows liquid hydrogen suppliers to drive fuel trucks directly to the ship at ports of call. Thus, the Zero-V would require little investment in fueling infrastructure.

The team designed the Zero-V using proven, commercially available hydrogen technology so they could be sure it would work. Once completed, the vessel design was reviewed by DNV GL and USCG. Both regulatory bodies independently came to the same conclusion: there are no “show-stopping” technical issues with the Zero-V design. DNV GL hydrogen expert Gerd Petra Haugom said:

This project has been a good test of our own rules and the alternative design approach for using hydrogen and fuel cells. The results from the Zero-V will be part of a benchmark to guide our assessment of similar vessels in the future.

With a solid design in place, the next step for the Zero-V is finding the funding to build it. Compared to diesel-powered research vessels, the Zero-V has a similar capital cost, but would cost roughly 7 percent more to operate and maintain. Given its benefits — much quieter, zero emissions and no risk of polluting fuel spills — Bruce Appelgate, who oversees the Scripps fleet, is hoping that like-minded donors will step up to support the project.

Like other game-changing ideas, this approach initially seems expensive. But solar power was very expensive not too long ago, and now it’s affordable and widely adopted. Hydrogen fuel cells are just as transformative a technology. They produce clean, quiet, nonpolluting power to ships while enabling superior scientific capabilities. Building and operating the Zero-V will significantly advance US marine transportation technology.