Mariners rescued from sinking ship in Gulf of Aden 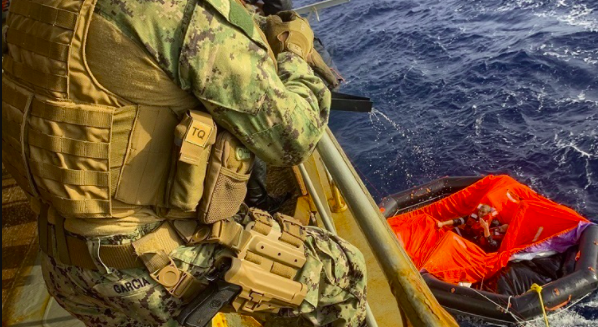 A US Naval ship provided emergency assistance to 15 crew members of a sinking general cargo ship in the Gulf of Aden, on 7 June.

The Military Sealift Command oiler ‘USNS Patuxent’ was notified by the UK Maritime Trade Operations watch center that the motor vessel ‘Falcon Line’ had experienced engine failure and was taking on water.

Upon arriving on the scene, Patuxent shielded the Falcon Line crew from heavy winds and high seas so the crew could board lifeboats, the US Navy informed. The naval ship safely recovered the 15 crew members and provided them with food, water and medical screening.

The US 5th Fleet is now coordinating with the owner of Falcon Line and other authorities to determine the most appropriate location to debark the crew members.

SOLAS Convention (1974) outlines the obligation of all mariners to provide assistance to those in distress at sea.

As professional mariners, our forces have a duty to help those in need at sea. The sailors and civilian mariners aboard ships like Patuxent have answered this call before, and they will continue to do so whenever possible,

The US 5th Fleet area of operations encompasses about 2.5 million square miles of water area and includes the Arabian Gulf, Gulf of Oman, Red Sea, and parts of the Indian Ocean.