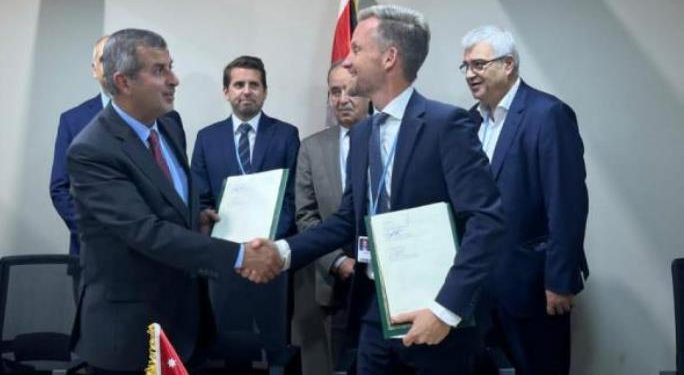 On the sidelines of COP27 in Egypt, A.P. Moller – Maersk  signed a memorandum of understanding (MoU) with Jordan’s Ministry of Energy and Mineral Resources for cooperation in the field of green marine fuel production and investments in green methanol production in the Aqaba region.

According to Saleh A. Al-Kharabsheh, Jordan’s Minister of Energy and Mineral Resources, the MoU is part of the country’s efforts to enhance its role as a regional centre for green energy production. He added that the two sides will work through this memorandum to cooperate in the fields of researching the possibility of investment and developing a project to produce marine fuel” green methanol “in Aqaba, through desalinating sea water and exploiting renewable energy sources. Morten Bo Christiansen, Vice President, Head of Decarbonisation at A.P. Moller – Maersk, highlighted the importance of Jordan’s location and its selection due to its abundance of resources.

Under the memorandum of understanding, AP Moller Maersk will conduct preliminary technical and economic feasibility studies for the project, as the company aims from this investment to produce sustainable marine fuel “green methanol” in a way that contributes to reducing emissions in the shipping sector.

Maersk is one of the largest companies operating in the field of containers and shipping in the world, with offices and branches in more than 130 countries, and it works to reduce carbon emissions in the shipping sector by switching to the use of green marine fuels. To boost the global production capacity of green methanol, in March 2022, Maersk entered strategic partnerships with six companies with the intent of sourcing at least 730,000 tonnes/year by end of 2025.

More recently, the company ordered six large ocean-going vessels that can sail on green methanol while it has revealed its plans for methanol bunkering in Singapore within 2023.