Lessons learned: Make sure to know what to do, before you release the CO2 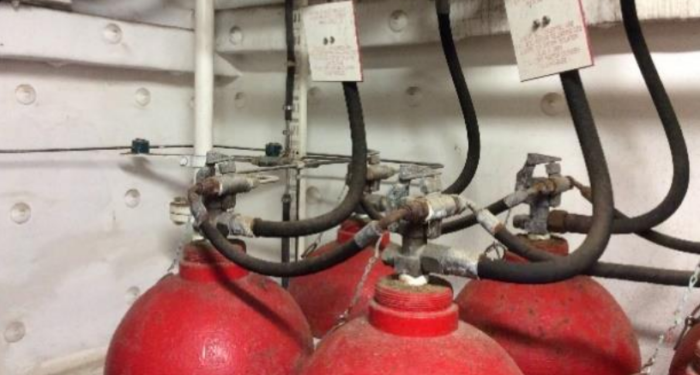 American P&I Club released a best practice guidance, focusing on what crewmembers should do before activating a CO2 system.

Specifically, the best practice guidance “Good Catch” takes into account that although every company’s safety management system is different, there is a common theme that all seafarers’ situational awareness and personal responsibility is tantamount to their own safety, that of their shipmates, the marine environment, cargo and the ship alike.

This initiative is a combination of short and focused guidance concentrated directly to the attention of seafarers to assure their understanding that:

However in its latest Good Catch guidance, the club describes the following case:

An ocean-going ship had an engine room fire when lube oil escaped under high pressure from an oil plug that had vibrated loose on a generator’s lube oil pump. The spraying lube oil made contact with the generator’s hot exhaust casing and ignited. The 2 engineers on watch were almost immediately chased out of the engine room by the heavy smoke and heat as the fire moved rapidly through the engine room space.

They quickly notified the bridge and the fire alarm was sounded. The crew responded professionally and swiftly got to their assigned muster stations. The engineers used the remote valves to isolate the fuel from the engine room.

As expected, the CO2 time delay alarm sounded and the engine room vent fans stopped when the CO2 alarm started. Soon after, they heard the CO2 bottles release their contents.

Unfortunately, the fire continued to burn for several hours as the CO2 failed to put out the fire. Upon later investigation, it was found that 2 doors to the engine room had been left open as were 4 large engine room vent covers.

Both of the engine room doors exited onto the main deck, one portside and the other to starboard and were routinely kept open for ventilation purposes.

Consequently, most of the CO2 that had been released into the engine room was rendered ineffective as it quickly escaped out the doors and vents until the fire burned itself out leaving the ship dead in the water.

The damage from the fire, having burned for several additional hours, added $3.4 million to the vessel’s repair cost. That extra fire damage could have been avoided. The ship was out of service for 5 months for repairs.

The consequences of this fire could have been worse. Fortunately, most of the CO2 escaped into the atmosphere and didn’t flow from the engine room into other manned spaces of the vessel through doors that had been left open. Also, if the fuel had not been isolated and secured, the fire could have burned for days and likely jeopardized the entire ship, cargo and the crew alike.

Be mentally prepared for fire emergencies. Think through in advance what must be done for different engine room fire scenarios and practice those steps during fire drills. Before activating the CO2 system, ALWAYS: