The absence of terminal and tank farm capacity has generated a growing demand for oil tankers to be used as floating storage, which is being reflected in daily hire rates, the Swedish Club noted in a new article discussing legal implications for charterers employing tankers as floating storage.

The current macroeconomic climate means that there will be potentially very long periods during which tankers will be used as floating storage. For instance, industry sources reveal that VLCC rates have been recently been pushed from averages closer to $100,000 to reportedly in excess of $300,000 a day.

Given that most charterparties do not contain storage clauses, owners and charterers alike are presented with an array of issues that need to be carefully considered. Any failure to do so may result in far-reaching legal implications.

When a charterer orders a vessel to be used as floating storage, the position is not as straightforward as an order to proceed from one named port to another for the purposes of loading and discharging.

For charterparties that contain a floating storage clause, such as BPTIME 3 (clause 21 – Storage), a right to order a vessel to be used for floating storage is express, but additional clauses will be needed to deal with the array of issues arising from such storage.

For charterparties that do not contain an express right for the vessel to be used for floating storage, the position is complicated, compounded if a bill of lading has been issued by owners, and may amount to an unlawful order by charterers.

For voyage charterparties, the situation is even less straightforward. Most voyage charterparties will contain an express term that “the vessel shall perform her service with utmost despatch and shall proceed to such berths as Charterers may specify…or so near thereunto as she may safely get…load the cargo…proceed as ordered on signed bills of lading…and there…discharge the cargo” (SHELLVOY 6).

If the term is not express, an utmost despatch term will likely be implied. Any order by charterers to stop the vessel for the purposes of floating storage places the owner at risk of breaching the “utmost dispatch” requirements and any specific bill of lading terms which restrict deviations other than for the safety of life at sea.

However, the precise scope of this provision has not been tested before the courts as regards floating storage, and it cannot be stated with confidence that this clause would, on its true construction, extend to permitting charterers to use the vessel for floating storage.

Under clause 22 of BPVOY4, charterers have a right to cause the vessel to “await orders at one or more location”.

Under clause 22.2.3, if, after loading, the vessel is instructed to stop and wait at charterers’ request, then all time spent by the vessel awaiting orders shall count as laytime or, if the vessel is on demurrage, as demurrage.

This may work if floating storage is considered to be within the orbit of clause 22. If it is not, demurrage would likely fall away and be replaced with damages for detention.

In addition, depending on the length of time the vessel is instructed to ‘stop’, any delay may even trigger an alleged frustration of the voyage charterparty. Mere hardship, inconvenience, or material loss will not frustrate a contract.

The doctrine of frustration only arises when an event occurs that is both unexpected and beyond the control of the shipowner and the charterer, and renders it physically or commercially impossible to fulfil the charterparty, or transforms the obligation to perform into a radically different obligation from that undertaken at the moment of entry into the charterparty.

In all cases, this is a question of fact and law, but given the current issues with terminal and tank farm capacity, such lack of capacity is unlikely to be found to be an unexpected event.

It is therefore of crucial importance that, before any agreement is reached on using the vessel for floating storage, owners consider not only the terms of the time or voyage charterparty but also the bill of lading and their insurance cover. 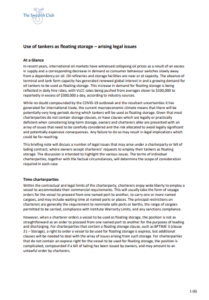